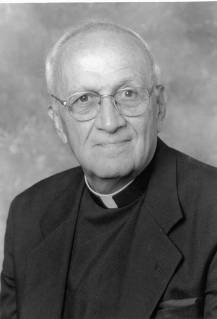 Celebrating sixty (60) years in the Ministry of the Lord and Archdiocese. Ordained October 1948.

1954 * Honored "Member of the Year" by the International Kiwanis Club for the State of Louisiana.

1956 * Appointed Chaplain for the only Leper Colony in America in Carville, LA serving 17 Orthodox Lepers. Buried all and married two. Later the colony was relocated to the Caribbean.

1957 * Honored by the National Boy's Scout of America for organizing the Bienville Trail Merit Badge for Scouts in tribute to the founder of the City of New Orleans (Jean Baptiste Le Moyne Sier DeBienville Trail 3 mile walking Tour).

1960 * Served as an Orthodox Chaplain.Staff and Faculty member at Tulane University Appointed Chaplain of the Propeller Club of New Orleans Appointed Chancellor of the Eighth Diocese by Bishop Silas

1964 * Organized the YAL Conference for the Archdiocese in New Orleans

1965 * Elected Chairman to raise funds for the United Way

Offered the opening prayer at the US Congress, House of Representatives

1970 * Appointed to the task force to bring an NFL Football Team to the City of New Orleans, the SAINTS.

Organized the Interchurch visitation Program "Meet Your Neighbor". The Cathedral had over 1,200 visitors a year.

1976 * Organized the only Greek Seafarers Center in America, Saint Nicholas

1977 * Appointed Director of Campus Ministry by His Eminence Archbishop Iakovos

Organized and Edited the National Campus Review for College Students

Offered the opening prayer at the Sugar Bowl

1982 * Organized the "Papouli Scholarship Fund" for the Ladies of Philoptochos Society granting Scholarships to Students of Holy Cross School of Theological in Brookline, MA