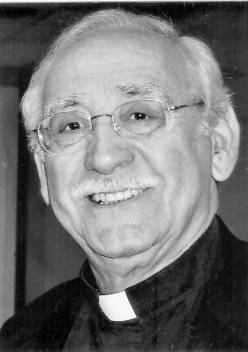 I was born in Racine, Wisconsin, on March 30, 1928, the eleventh and last child of Gus Filandrinos from Hora, Trifillias, Greece, and Demetra Bakogiannis from Vamvakou, Laconia, Greece.

After high school, I attended Holy Cross School of Theology, the last class to enter at Pomfret, Connecticut, and then to Brookline (1947-1950). I was drafted into the U.S. Army in November 1950 and served as an interpreter with the Greek Expeditionary Forces in Korea. After completing my military service, I enrolled at the University of Wisconsin, earning a BA degree in Sociology. After various employment experiences I was called to Saint Mary's Greek Orthodox Church in Minneapolis, Minnesota, in 1961 and assumed the duties of Lay Assistant, Youth Director, Greek School teacher, and chanter. It was there that I met my beloved Presbytera lone Nickolatos and we married in September of 1962. A year later, I was ordained to the Holy Diaconate by Bishop Meletios of Blessed Memory in Milwaukee, Wisconsin, on September 22, 1963, and to the Holy Priesthood in Chicago, Illinois, on September 29, 1963, by Archbishop lakovos of Blessed Memory. My first parish was Assumption in Chicago as an assistant (1963-1967) and then to Saint George in Chicago as Proistamenos (1968-1970). I then assumed the pastorship of Saint John the Theologian parish in Jacksonville, Florida (1970-1972), moving to All Saints parish in Peoria, Illinois, where I remained until I retired in 1997. We moved to Minneapolis and for two years, 1998­-1999, served as interim priest in Duluth, Minnesota, until a permanent priest was assigned. Presbytera and I drove 340 miles round trip every weekend for those two years.

Following the two years in Duluth, I accepted a position as Visitation Priest at Saint Mary's in Minneapolis, visiting and ministering to parishioners in nursing homes and hospitals. I also continue to assist with Holy Communion and distribute the antidoron. I co-officiate at many funerals, an occasional wedding and baptism and hear confessions.

All during my priesthood, Presbytera lone has been a faithful helpmate. We have been blessed with three great children: Dean (Brooke) who have one daughter, Aubrie, are expecting a second daughter in November 2007. Our daughter Andrea (Philip) have three children, Theodore, Zoe, and Owen (Evgenios), and our youngest, Stephen (Panos).

We have been blessed with 45 years of marriage and 44 years in the Holy Priesthood for which we thank our Lord. We pray all of our brother priests and sister Presvyteres will continue to be blessed abundantly with health and joy, along with their families.