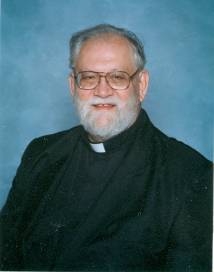 The Rev. Stanley S. Harakas, is a priest of the Greek Orthodox Archdiocese of America and is Archbishop lakovos Professor of Orthodox Theology Emeritus in the field of Orthodox Christian Ethics at Holy Cross Greek Orthodox School of Theology, Brookline, Mass., U.S.A

He was born and baptized with the name "Stylianos" anglicized to "Stanley," on January 13, 1932 to Sam (Spyridon) Harakas and Katherine (Moraites) Harakas in Pittsburgh, PA. He attended elementary school in Wilkinsburg, PA, graduating from Wilkinsburg, PA High School in 1949.

He received his undergraduate and theology degrees from Holy Cross. In 1965, he earned the degree of Doctor of Theology (Th.D.) from Boston University. In 1966 he began teaching at Holy Cross Greek Orthodox School of Theology. He has been Visiting Professor at St. Vladimir's Orthodox Seminary in New York, Boston University School of Theology, John the 23rd Center in New York City, Boston College Department of Theology, and Emmanuel College in Boston and has lectured at the University of Thessalonike, Greece. In 1986 he was appointed to the first endowed chair at Holy Cross as "Archbishop lakovos Professor of Orthodox Theology." He served as Dean of Hellenic College for five years, and Dean of Holy Cross Greek Orthodox School of Theology for ten years (1970 to 1980). During this time, both schools were accredited and new degree programs established.

A member of numerous professional societies, he has served some of them as an officer. He has been President of the Orthodox Theological Society, and a member of the Board of Directors of the Society of Christian Ethics. In 1988 he was elected to membership in the American Theological Society. Fr. Harakas was the inaugural recipient, in 1981, of the "Archbishop lakovos Faculty Award." In 1986 he was honored as a "Distinguished Alumnus" of Boston University School of Theology. In May, 2000 he was awarded an Honorary Doctor of Divinity degree by Holy Cross Greek Orthodox School of Theology.

Fr. Stanley was a Plenary Speaker at the Seventh General Assembly of the World Council of Churches in Canberra, Australia, and from1990 to 1998 served as a Commissioner of the WCC Unit ilion "Justice, Peace and Creation." He served as co-chair of the Orthodox Studies Group of the American Academy of Religion from 1992 to 1998.

Since 1985 he has authored the article On the "Orthodox Church" in the annual supplement to The World Book Encyclopedia and, from1992-1999, wrote a similar article for the Encyclopaedia Britannica. For twenty-one years (1980-2000), he was a weekly columnist in the national Greek-American newspaper, The Hellenic Chronicle. In 1989 he received a grant from the National Endowment of the Humanities and in 1990 a grant from the Association of Theological Schools to work on an unpublished Greek manuscript. He has been a columnist and is a contributor to the Orthodox Observer. From 1997 to 1999 he was Editor of The Greek Orthodox Theological Review, published by the Faculty of Holy Cross Greek Orthodox School of Theology. He was elected Courtesy Associate Professor by the Religion Department of the University of South Florida for the 1997-98 and 1998-99 academic years. From October, 1997 to March, 2004, he was a columnist for the weekend English section of the national Greek Language daily the National Herald. He is a member of the Education Committee of the American Foundation for Greek Language and Culture and in March, 2000 was appointed Honorary Professor of the Interdisciplinary Center for Hellenic Studies at Tampa's University of South Florida. Since 2002 he has been a Guest Editorial writer for The Hellenic Voice, published in Boston, MA.

Rev. Harakas has served as pastor of parishes in Lancaster, PA, Peabody, MA, Lexington, MA and Newburyport, MA. In each there were significant building programs. He has also served as Sunday supply priest at Holy Trinity Church in Lowell, MA, St. Nicholas Church in Enfield, CT. and the mission parish of Saint Gregory the Theologian, in Sharon (now Mansfield), MA. He was called out of retirement to serve the "Christ the Savior Greek Orthodox Mission of Hernando County" of the Metropolis of Atlanta, Greek Orthodox Archdiocese of America, which is in the process of constructing a new church and parish hall in Spring Hill, FL.

He is married to the former Emily G. Maniates of Boston, MA. They have had five children, four surviving, Spyridon, Demetrios, Angelica & George, (Katherine Mary deceased) and have three grandsons (Nikolas, Stephen and Lukas) and four granddaughters (Zoe Katherine, Altheia, Theodora and Alexandra). The Harakas retired to Florida in July of 1995.