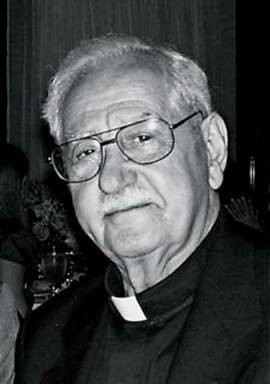 Father Stamatios Ganiaris is a retired priest residing in Wilmington, Delaware with his Presbytera  Ioanna.

He was born in 1928 on the island of Chios, Greece, being the third child of Socrates and Eleni Ganiaris.

His father had graduated from the Theological School of Halki in Constantinople in 1909.  He was a classmate and friend of Archbishop, and later, Ecumenical Patriarch Athenagoras

During his High School years, Stamatios enjoyed two extracurricular activities. He was a devoted Sea Scout member and leader, and regular attendant of the religious classes taught by the theologians/catechists of the Zoe Brotherhood.

Due to their influence and the guidance of his father, who served the Metropolis of Chios as a distinguished lay preacher for fifty years,   and following an invitation from Archbishop Athenagoras,   Stamatios decided to come to America in 1948 to attend the Holy Cross Theological School in Brookline, MA. It must be noted that Athenagoras had written letters to his classmate Socrates Ganiaris in the early thirties urging him to think about coming to America to be ordained a priest  because of the shortage of educated clergymen here at that time.  But he graciously declined the offer, being well established in Chios as an attorney for civil law.  So, Stamatios’ decision to attend the Seminary and to become a priest in America was a cause of great satisfaction to his father.

Stamatios Ganiaris graduated from “Holy Cross” in June 1952  and two months later he married his beloved Presbytera,  Ioanna Gyftopoulos,  in the Church of the Assumption in Detroit, Michigan.  The celebrant was Fr. Artemios Mandakas.

His first assignment was to the parish of Saint Demetrios in Jamaica, NY, where he worked as a youth director, Scout leader and office manager from
September 1952 to August 1954.  He also assisted as a deacon the late Father Nicholas Terezakis.  While in New York, he continued his graduate studies at the General Theological Seminary in New York City.

Upon their retirement in March 1993, Fr.  Stamatios and Presbytera Ioanna returned to Wilmington, DE  to be close to their family and  their former
beloved parishioners.  He feels deeply grateful to God for being able to assist in the liturgical services at Holy Trinity Church  and to participate or lead in
Community programs,   such as the activities of the “Young at Heart” group for Seniors and the weekly Bible Study.

During his pastorate at “Holy Trinity,” Father Ganiaris was instrumental in the construction of a new addition to the Church complex, the  “Hellenic Community Center”  that includes a large  social/educational  Hall and Gym, which is used for all kinds of events  and 12 new classrooms for the Greek School and Sunday School.

Father Stamatios and Presbytera Ioanna are the proud parents of five daughters and seven grandchildren.