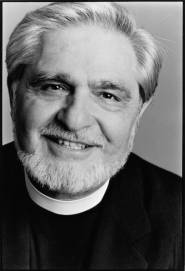 Over 600 guests from throughout the United States, led by Archbishop Demetrios and Mayor Michael Bloomberg,attended the gala retirement dinner for Father Robert Stephanopoulos held at Cipriani's Wall Street on October 7th, 2007. Father Robert retired following 25 years as Dean of the Holy Trinity Cathedral, the second longest tenure in the 105 year history of the Cathedral. A priest of  the Greek Orthodox Archdiocese of America for 48 years, he served as Dean of the Archdiocesan Cathedral of the Holy Trinity  beginning in September 1982 .Prior to that time he served as pastor of St. Demetrios Church, Fall River, MA; the Church of Our Saviour, Rye NY and as Dean of Sts. Constantine and Helen Cathedral, Cleveland, OH.

Joining Father Robert and Presvytera Nikki, for the evening were their four children and two granddaughters: Mother Agapia, an Orthodox nun; George, husband of Alexandra and father of Elliot Anastasia and Harper Andrea, host of This Week, Sunday mornings on ABC TV; Marguarite, Asst. Vice President for Conferences and Events for Deutsche Bank, chairman of the evening's event and Andrew is a psychotherapist and Director of Client Care for Moonview Sanctuary, Santa Monica, CA.

Mayor Bloomberg offered warm remarks during the reception followed by the program including: Chairman Catherine Moutoussis who introduced the Master of Ceremonies for the evening Thalia Assuras, CBS News anchor and Correspondent; Cathedral President John Stratakis, Consul General of Greece Catherine Boura, Ambassador of Cyprus to the U.S. Andreas Kakouris .Ms. Assuras then read a message from President William J. Clinton followed by a video from Senator Hillary Clinton.

The second half of the evening began with  the introduction of koumbari and classmates of Father Robert including: Father Ernest Blougouras,(ret),Bonita Springs,FL; godfather of Marguarite;  Father Tom and Presvytera Vaso Paris, Oakland, CA, best man of Father and Nikki, and godparents of George; Presvytera Faye Stylianopoulos,Boston, godmother of Andrew; Greg Simones, godson of Father Robert and Nikki, with his brother Thomas and  Father Charles and Joan Simones, New London, CT and Father Peter and Presvytera Kelly Papps of Dover,NH, whose bestman was George Stephanopoulos.

The program continued with several speakers representing different periods of the life of Father Robert and Presvytera, introduced with appropriate videos. Beginning with Father Tom Paris, Dean of the Ascension Cathedral of Oakland, CA and the person responsible for introducing Father Robert, a fellow seminarian, to Nikki in 1954 at a GOYA Conference in Minneapolis. Father Tom was the best man at their wedding and Father and Presvytera are the godparents of George. Father Tom. He was followed by Paulette Poulos, dedicated assistant Archbishop Iakovos, now s Executive Director of Leadership 100 and a long time friend of the Stephanopoulos family. Randy Katchis   representing the  younger generation, all those who grew up with the Stephanopoulos children at the Church of Our Saviour in Rye, NY from 1966-74, and whose entire family, many of whom attended  along with several other members of the Church of Our Saviour community

A special group of friends attended  from Sts. Constantine and Helen Cathedral of Cleveland,OH - a parish which opened their hearts to the entire Stephanopoulos family when they arrived on Labor Day, 1974. Speaking on their behalf was Dr. John Collis, good friend, member of the Archdiocesan Council and frequent visitor to the Cathedral.

Former U.S. Ambassador to Jamaica and Greece. However, to the Stephanopoulos family, Michael and Estelle Sotirhos, Michael Jr. and Stacy are the people who welcomed them to New York , even putting them up in their home, and have always been there, throughout the years at Holy Trinity Cathedral. Ambassador Sotirhos was also the person most responsible for the beautiful Forum Building and Cathedral Center.

Father Nicholas Soteropoulos, President of the Retired Greek Orthodox Clergy Association of America (RCA), then made special presentation to Father Robert welcoming him to the RCA, a baseball cap and cookbook. The evening's program concluded by comments from His Eminence Archbishop Demetrios and warm expression of appreciation from Father Robert and the entire Stephanopoulos family.

A renowned ecumenist, theologian, lecturer and pastor, Father Robert developed innovative social outreach programs in the greater Cathedral community. Foremost among them the Cathedral Fellowship, a program that has involved hundreds of young professional in the church and community. Also, through his initiative, the Cathedral became a founding member of the Neighborhood Coalition for Shelter. His Thursday evening Bible Study for adults from their 20's to 70'was  known for its interaction and spirited discussion

A graduate of Holy Cross School of Theology, Brookline, MA, he studied one year at the University of Athens School of Theology and received a Ph.D. in Ecumenics, Missions and World Religions at Boston University.  Long active in interreligious outreach and dialogue, he has served as Ecumenical Officer of the Archdiocese, was the first Orthodox and youngest person ever elected recording secretary of the National Council of Churches. Author of "Guidelines for Orthodox Christians in Ecumenical Relations", he is a Founding Member of Orthodox Dialogues with Catholics, Anglicans, Evangelicals and Jews.