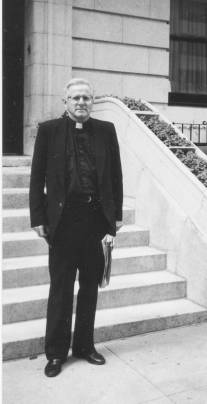 Miltiades B. Efthimiou was born in Boston, Massachusetts on January 20, 1935 and spent most of his youth in New York City.  His father was the late Rev. Basil Efthimiou, Dean of the Boston and New York Cathedrals, respectively, and his mother was Helen (Caramanlis) Efthimiou.  Miltiades was educated at the Holy Cross Theological School, received a Master's degree from Boston University, and a Ph.D. from Miami University of Ohio.

Rev. Efthimiou was ordained in 1958, served three parishes of the Greek Orthodox Archdiocese of North and South America and taught history at Miami University of Ohio as well as other institutions of higher learning. These parishes include St. Paul's (Hempstead, Long Island New York), Sts. Constantine and Helen (Detroit, Michigan) and Sts. Constantine and Helen (Middletown, Ohio).

In addition to working in the pastoral and academic fields, Rev. Efthimiou has been active in the social services, acting as a consultant in California and Michigan.  He holds the ranking title of Protopresbyter of the Ecumenical Patriarchate of Constantinople.

From 1981 until 1996, Miltiades was the Executive Director of the Department of Church and Society for the Greek Orthodox Archdiocese, the Director of the Inter-Church Relations of the Archdiocese, and the Ecumenical Officer of SCOBA (The Standing Conference of the Canonical Orthodox Bishops in the Americas).  He was also the Executive Officer of the Order of St. Andrew, the Archons, an organization serving the needs of the Mother Church of the Ecumenical Patriarchate in Constantinople.  He represented the Archbishop and Archdiocese on several national, federal, ecumenical, and religious commissions and dialogues on behalf of the Greek Orthodox Archdiocese, and SCOBA as well as on the Board of Trustees of the International Orthodox Christian Charities (I.O.C.C.) and on the Board of Governors of the National Council of the Churches of Christ, U.S.A.  He represented the Orthodox Church on Christian-Jewish Dialogues, Christian-Muslim Dialogues, Orthodox-Lutheran Dialogues, and Orthodox Anglican Dialogues. In 1991, he acted for the Ecumenical Patriarchate at the World Council of Churches Assembly in Canberra, Australia, and in 1994, the Faith & Order Assembly of the WCC in Santiago De Compostela, Spain.  He accompanied, and was consultant to, the Historic Catholic/Orthodox Bishops Conference in 1995-96 which met in Rome and Constantinople.

Rev. Efthimiou is the author of numerous articles in monthly newspapers, magazines, and theological journals, including Orthodox Observer, National Herald and L'Osservatore Romano.  He has also authored two books, History of the Greek Orthodox Church in America (Cosmos Publishing) and Latins and Greeks on Cyprus (Holy Cross Press).

Miltiades continues to advise Church leaders on Ecumenical matters and is writing on religious issues in the Middle East and Iraq, where he spent time meeting with government officials with a delegation from the National Council of Churches in 1992.  He is also compiling research for a sequel to History of the Greek Orthodox Church in America, as well as a book on ancient Byzantine titles and investitures.

He has two children, Basil and Kimberley, as well as two grandchildren, Amanda and Charlee.  Rev. Efthimiou is prolific in piano, studying with his late mother from a young age.