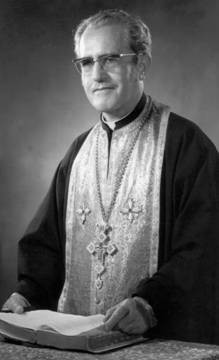 Father Michael C. Harmand, the first American-born priest to be ordained to the priesthood in the Greek Orthodox Diocese, died on January 18, 2007 at the age of 94.

Father Harmand was one of the new generation of Orthodox Priests. He was born on August 20, 1912, one of the six children of Fr. Constantine and Soultana Harmand in Nashua, New Hampshire. Although raised in the United States, in 1931, he commenced his studies for the priesthood at Halki, Constantinople. Thereafter he enrolled in the University of Athens, College of Theology and graduated in 1938. During his studies at the College of Theology, Father pursued his interest in music by studying at the Conservatory of Music under the late Dimitri Mitropoulos.

In 1939 Father was married to Mary Charouhis of Flint, Michigan and subsequently was ordained a deacon in the Cathedral at Boston, Massachusetts where he served for two years. He was ordained to the priesthood by Bishop Germanos Polyzoides in Pontiac, Michigan, in 1941; thus becoming the first American-born priest to be ordained for service in the Greek Orthodox Archdiocese of North and South America. Thereafter, he was appointed to serve at St. George Church in Pontiac and remained with the Church until October, 1951.

On October 2, 1951, when Father became the 14th priest to assume the pulpit at St. Sophia Greek Orthodox Church of Syracuse, New York, no one envisioned that Father would be the spiritual leader of three generations; the founders of the church, their children and their children's children; thus serving the parish for 55 years.

When Father Harmand arrived in Syracuse, St. Sophia was a Church in transition. The Church was forced to relocate as the first Church built was taken by eminent domain for the construction of a War Memorial. A Protestant Church was purchased in a residential area (Massena St.) as a temporary site. Father recognized that a new Church was contemplated by the Community and recommended that a permanent Building Fund Committee be created. Those funds became the nucleus to defray the cost of the new St. Sophia Church on Waring Road, Dewitt, New York, a suburb of Syracuse. Eighteen years after his recommendation, it was a joyous event when he co-celebrated the Liturgy on September 9, 1973.

Father worked actively with parishioners, young and old. Shortly after his arrival, his keen interest in the youth was evident. Under his leadership together with Presvytera Mary, the Sunday School program was revitalized and reorganized. He encouraged the Parish youth to retain the Greek language by attending Greek School, which he taught. In addition Father taught Greek evening classes to parishioners and non-parishioners until 2001. He also advocated the founding of GOY A and JR. GOYA for the youth and young adults of the community. Under his assistance the Ladies Philoptochos Society was formed, as the successor to the Holy Cross Society, an existing women's fellowship group. He also encouraged the Church Choir in 1967 to join and became an active participant in the Mid­Eastern Federation of Greek Orthodox Choirs. Together with the Parish Council he worked in the establishment of the annual Greek Cultural Festival in 1973, which has continued to date and is deemed one of the outstanding cultural events in Central New York.

Father's beautiful tenor voice enriched the Church services for over fifty years. His musical talents had also been directed to church music. He devoted many hours in directing and rehearsing the Church Choir: Father was also an accomplished musician, playing various instruments, his favorites being the trumpet and drums. Father organized a mandolin ensemble at the Massena Street Church, which performed for the parish community and brought a little bit of Greece to many a social event. At the new St. Sophia in Dewitt, he organized a children's orchestra, which delighted the community.

Drama was another feat undertaken by Father Harmand. In 1953 he directed the Choir in presenting a long remembered hilarious Greek Comedy portraying the trials and tribulations of a Greek Family confronted with the generation gap in the United States entitled "Spoudaia Ta Lakana". Father within the last few years before his death participated in musical productions staged by the Sophian Players at St. Sophia under the direction of his son, Dr. William Harmand.

In July 2003 he received the National Forum's Athenagoras Distinguished Service Medal from the Mid-Eastern Federation of Church Musicians.

To inspire Pan Orthodoxy in the Syracuse Community Father worked with other Orthodox Clergy in the area to celebrate the Sunday evening Lenten Vespers services, rotating the services among the parishes, which continue to date. In conjunction with the services, outstanding theologians and lay Orthodox leaders were invited as guest lecturers to enlighten parishioners on Orthodoxy and related topics. He also encourages the young and old to partake in religious classes.

Father was not only the spiritual leader of the communicants of St. Sophia but also the followers of the Orthodox faith in surrounding communities. He visited said communities to celebrate the liturgy and perform sacraments. In addition for many years Father was the spiritual leader of the university students in the area. He encouraged them to meet in fellowship, attend services at St. Sophia and participate in the church community life. Many of them left Syracuse with a "warm spot" in their hearts for the St. Sophia Community as a result of Father and his hospitality.

As a lasting tribute to Father Harmand, St. Sophia Chapel was dedicated as the St. Michael Chapel in November, 1986 by Bishop Timothy of Detroit.

On March 9, 1972 Archbishop lakovos in recognition of Father's work for the Greek Orthodox Church elevated him to the rank of Protopresbyter.

Although Father retired officially as pastor of St. Sophia in the Fall of 1992, he continued to serve the Church until several weeks before his death. Over the span of said 14 years Father would substitute for area clergy, co-celebrate at St. Sophia's until his health began to weaken him. He continued to serve the parish by chanting at all services until Christmas day of 2006.

On the occasion of Archbishop Demetrios' first pastoral visit to St. Sophia in September, 2003, the Archbishop paid tribute to Father Harmand as the oldest priest in the Archdiocese at the age of 91. He stated: "He is a human monument and we would like to honor him not by placing wreaths or other things but by embracing him and really expressing our gratefulness to such a living tradition of the church".