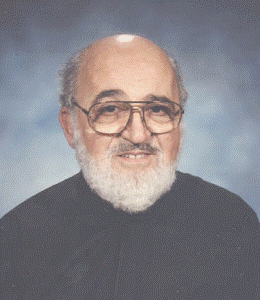 Fr. Manousos Emmanuel Lionikis has successfully completed sixty three years as a Priest in the service of the Greek Orthodox Church. Fr. Manousos was born in New Brunswick, New Jersey the son of Emmanuel and An-droniki (Psalidakis) Lionikis. He was one of five children. He attended schools in New Brunswick, N.J. through High School. At the age of eight, he began serving the Church as an Acolyte. The late Archbishop and Patriarch Athenagoras tonsured him and elevated him to the rank of Reader.

Fr. Lionikis entered the Greek Theological School in Pomfret, CT in 1938 and graduated in 1944. While a student at the Seminary, he managed the Seminary Print Shop for over five years. There they printed the first Greek English Prayer Book for our young men in the Armed Forces during WW II, the materials for our Sunday Schools nationwide (Edited by The Late Fr. Christos Pappas in Greek), and four editions of the Annual Yearbook of the Archdiocese. Also printed were “The Priests Service Books” containing the Liturgies and the Sacraments in Greek and English for the newly ordained Priests. The Service and Prayer Books were compiled by our Dean Bishop Athenagoras Kavadas and translated by Rev. Athenagoras Kokkinakis. Both Hierarchs successively became Archbishop of Theateiron in England. The Seminary Press also supplied additional much needed printed materials for the Seminary.

For over forty years, Fr. Lionikis edited and published an annual Greek Orthodox Religious Calendar. Among his other works are: A Wedding Service Book in co-operation with the late Fr. John Hondras, a translation of the Consecration Vespers and the Consecration Service (with illustrations). Also, the St. John All Saints Icon Book (Describing a 46 by 4 foot Mosaic Icon of All Saints located between the Church proper and Choir Loft of the St. John Church), and a translation of the Divine Liturgy (Fourth Edition) which includes both the Greek and English music, historical and biblical notes and a 48 page glossary.

While visiting the Assumption Church in Chicago Father met Katherine Spiropoulos who was active in Choir and Religious School. They were married on March 11, 1945. Presvytera Katherine actively assisted her husband in Parish activities. Presvytera Katherine also had a successful career as a Real Estate Broker and later operated her own Women’s Boutique in Park Ridge, IL.

Fr. Manousos and Presvytera were blessed with four sons:

Lt. Col. Emmanuel (Ret) and his wife Athanasia served in Germany for 23 years, he in the U.S. Air force and Athanasia as a teacher in the Military Middle Schools. Emmanuel spent fourteen months in Greece working for SAIC (Science Applications International  Corp) as Chief Engineer for the installation of the Security System at the Athens 2004 Olympics and now does consulting for the same firm. Athanasia now teaches in the Marine Base Middle School at Camp Lejeune, NC. Their son Manousos lives in Grand Rapids where he attends college. Their daughter Katina (now married), and younger son Demetri, following College graduation, live and work in Chicago.

Dr. Nemo (Neoptolemos) and his wife Janis have one son, Alex. Dr. Nemo is a Mathematician for the Defense Department. His wife Janis, a former High School teacher, now prefers homemaking. Son Alex is preparing for a career as a Paramedic and Fireman. They reside in Columbia, Maryland.

James and his wife Katrina live in Chicago, IL with their two young children Aleko and Flora. James, an Engineer in Computer Science, has left computing and spends his time on real estate investments in Chicago. Katrina, a Fine Arts Major enjoys homemaking and pursuing her interests in painting, sculpture and music.

Paul, his wife Susan and their son Andrew live in Chicago. Paul, an Engineer in Computer Science and a consultant, is employed by J. P. Morgan and Chase Bank in Chicago. Susan, a Music and Psychology Major, now prefers homemaking and Andrew is a sophomore in High School.

Fr. Lionikis was ordained in 1945 and assigned to the parish in Cheyenne, Wyoming. During his service in Cheyenne he served the Military Personnel at Ft. Warren and often traveled the entire state to serve the spiritual needs of the Greek Orthodox Faithful. His second assignment was serving both Parishes of Waukegan, IL and Racine, WI. While in Waukegan he held Religious Services at the Great Lakes Naval Station for the Orthodox Servicemen before his regular Sunday Liturgies and also the needs of the Greek Naval Personnel training at Great Lakes.

Fr. Lionikis’ next assignment was Joliet, Illinois. While in Joliet he also attended Seabury-Western Theological Seminary in Evanston, IL, receiving his Master's Degree in Sacred Theology in 1956. The subject of his thesis was: “Correspondence and Contacts between the Anglican and the Eastern Orthodox Church from the 15th through the 19th Centuries).”

In 1961 Fr. Lionikis was transferred to Gary, Indiana where he was able to enforce the Archdiocese By-Laws and eliminate an odd Two Party System made up of a Board of Trustees and a Parish Council which greatly impeded progress. Before leaving Gary in 1969 the Parish acquired the land upon which the present Church Complex was built in Merrillville, Indiana.

For the past 39 years, Fr. Lionikis has served the Saint John the Baptist Parish in Des Plaines, the first 28 years as pastor and the last 11 years as Pastor Emeritus. At the Saint John Parish Father Lionikis advanced the need for full participation of our children in the Sunday Divine Liturgy and in the Liturgical life of the Parish. The entire Divine Liturgy has been celebrated in the Guardian Angel Chapel during the school year for the last 38 years to enhance the liturgical life of our children. Fr. Lionikis also established full stewardship replacing the Festival and Raffle, giving parishioners more time to engage in spiritual activities. The main Sanctuary of the Parish was built soon after Fr. Lionikis’ arrival.

Fr. Lionikis has served in the Chicago Metropolis for 62 years. He served on the Diocesan Spiritual Court for twenty years, a term as President of the Diocese Clergy Syndesmos, for a number of years he headed our Diocese Medical and Hospitalization program before it was incorporated into the Archdiocese Plan, served for a number of years on the National Presbyters Council and various Diocesan Committees. The Church has honored him by conferring upon him the title of Protopresbyter of both the Greek Archdiocese and the Ecumenical Patriarchate.

Fr. Lionikis has survived a 50 year bout with cancer (six major surgeries in all) and numerous other serious surgical and medical problems. He is a survivor, well focused and still actively serves the St. John the Baptist Church in Des Plaines, IL. Fr. Lionikis and Presvytera Katherine reside in Mount Prospect, IL and continue to lead an active life in the Saint John the Baptist Parish.