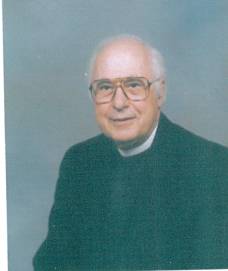 I was born in Sherbrooke, Quebec, Canada on October 14, 1920. The fourth of nine children, six boys and 3 girls born to Panayioti and Demetra Mentis.

I attended St. Patrick's Academy in Sherbrooke and upon graduation entered Bishop's University in Lennoxville, Quebec. After two years I chose to pursue theological studies and entered Hellenic College/Holy Cross in Pomfret, Conn.

It was a new school and funds were limited. We grew our own vegetables, raised our own animals for meat. Our eggs were fresh from our own chickens and we all worked the farm.

And to insure proficiency in Greek, we were fined 25 cents for each English word spoken.

In 1945 I married Irene Raptis, daughter of George and Angeline Raptis of Wellsville, NY. The late Bishop Ezekiel Tsoukalas, assisted by priests from Buffalo, Rochester, and Jamestown, NY performed the ceremony.

Presvytera and I have three children: Peter (Tina), Ann, and Constantine, aka Charlie (Gail). Our grandchildren are Elias, David, Senie, Elaine and Ann Marie.  We also have one great grandson, Peter.

My first parish was Jamestown, NY, which consisted mostly of Northern Epirotes who worked at the local furniture factories. At that time, Jamestown furniture was very well known.

My second parish was Holy Trinity in Harrisburg, Pa, which later moved to a new and larger facility in Camp Hill.

Next came Ithaca, NY where I remained for over 10 years. While there I served Cornell University and Ithaca College as a Chaplain.

We worked in harmony with all of our church communities, but felt it was time to move further south. We were assigned to St. Theodore in Brandywine, Md. It was a new and growing community. A new church was built in Lanham, Md. to better accommodate our needs.

My final full time assignment was at the Nativity of the Theotokos in Fredericksburg, VA, where I served for 5 years.

In between assignments I chose to serve parishes in need of a priest. I served at St. Catherine's in Falls Church, Va. as a second priest, St. George, Ocean City, Md., Holy Trinity, Sioux City, Iowa, St. John the Baptist in Myrtle Beach, SC and others.

Unfortunately, poor vision keeps me from serving anymore. However, my heart and soul are in my Lord's work. As a retiree, we spend our summers in Webster, NY and winters in Gulf Shores, Alabama.