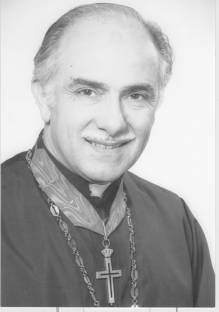 Father John was born on October 7,1925 in Boston, Massachusetts of Micrasiates immigrant parents, Anthony and Evangelia Limberakis who were born in the Asia Minor city of Alatsata, a suburb of Smyrna. He is the oldest of four, having a younger brother and two younger sisters. He attended public schools in Somerville and, having completed all his requirements, graduated in his junior year of high school. At the tender age of 16, he enrolled in Holy Cross Greek Orthodox School of Theology when it was located in Pomfret, Connecticut. Upon graduation in 1948, he was appointed registrar of the Seminary, serving as executive secretary to the dean, the Rt. Rev. Athenagoras Cavvadas, of blessed memory, who was also Bishop of New England.

Father John's first charge was in Fresno, California, where, soon after his arrival in 1949, he initiated a church building program culminating with the relocation of the parish and construction of a new Byzantine-style Church of Saint George. In 1955, he was assigned to the Church of the Annunciation in Providence, RI where once again he led the parish to relocate from the inner city and erect a new neo-Byzantine style church edifice in the suburb of Cranston. He came to Philadelphia in 1970 and was assigned to one of oldest parishes in the country, the Church of the Annunciation, located in Elkins Park, PA. Construction began the following year on a traditional Byzantine edifice fashioned after an 11th century church in Daphne. In 1990 after three church building campaigns, he retired from the Annunciation; his retirement was short ­lived, however, when the Archdiocese asked him a week later to shepherd the young community of Saint Sophia in Norristown, PA. There, too, upon his arrival, a new building program was subsequently launched. The parish relocated from Norristown to Jeffersonville, the gateway of historic Valley Forge in 1996, not far from the site where George Washington wintered his troops during the American Revolutionary War. In all four parishes where Father John has served, building programs were begun and brought to fruition with the relocation and completion of new edifices. In 1999, delegations from all four parishes he served attended a testimonial banquet held in Father John's honor to acknowledge his 50 years of dedicated ministry as well as his and Presvytera Elizabeth's 50th wedding anniversary.

The church has honored him with Byzantine officia Οικον?μος, Σακελ?ριος and Πρωτοπρεσβ?τερος first by the Ecumenical Patriarchate, then by the Archdiocese of America; he is also a Σταυροφ?ρος το? Παναγ?ου Τ?φου, an honor bestowed by the Patriarchate of Jerusalem). He has pursued graduate studies, initially in Fresno, then in Providence, and finally in Philadelphia. He holds a B.A. and a B.D. from Holy Cross and an M.A. from Temple University. He has served the full range of elected clerical offices on the local scene, including diocesan and archdiocesan levels. He has been active in inter-faith and ecumenical affairs, and has often been asked to represent the Church at various high-level academic and governmental conclaves.

Father John has led some ten pilgrimages to the Holy Land, liturgizing at the Church of the Holy Sepulcher among many other Greek Orthodox churches of the region, being baptized in the River Jordan, ascending Mount Sinai, and continuing on to Constantinople, the seat of world Orthodoxy and the site of the Ecumenical Patriarchate. With his family, he has traveled extensively through the years, visiting some of our most prominent monasteries and shrines throughout Greece, as well as national historical sites.

On the feast day of the Archangels (8 November 2007), Father Limberakis celebrated his 58th anniversary since becoming ordained a priest.

Father John A. Limberakis led four parishes into building houses of worship. A dynamic speaker and liturgist, a devoted husband, a loving father, grandfather and great grandfather, he always promoted and defended the Mother Church of Constantinople, the Ecumenical Patriarchate.