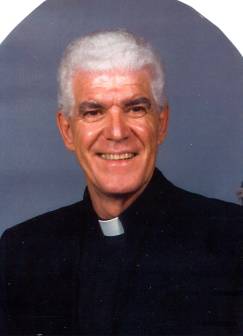 Father James was born in Oakland, California on July 3, 1930, to Anastasios (Thomas) and Penelope (Vergou) Adamis, where he finished his elementary and high school education.  From 1948 to 1953 he attended the Holy Cross School of Theology in Brookline, MA. On September 6th of that year he married Evelyn Spallas and  at the Holy Trinity Greek Orthodox Church in San Francisco, CA by His Grace Bishop Athenagoras of Elaia (Kokkinakis). They have three adult children William, Penelope and Thomas and five grandchildren Christopher, Corinna, Jesse, Raychel and James. In 1955 he completed his theological education at the Rizarion Seminary in Athens, Greece.

Father James was ordained a deacon on May 14, 1954 at the Church of Saint George (Rizarion) in Athens Greece by His Grace Bishop Dionysios of Rogon (Assistant to the Archbishop of Athens), and a priest on August 15, 1955 at the Holy Trinity Church in San Francisco, California by the late Archbishop Michael of blessed memory.

Father James has been a priest of the Greek Orthodox Archdiocese of America for 52 years and has served the following parishes:

of San Francisco by His Grace Bishop Anthony were he served until he was assigned Dean of  the Saint Sophia Cathedral in Los Angeles. Father James retired in 1995.

Since his retired in 1995 Father James has served as interim priest to the following parishes: