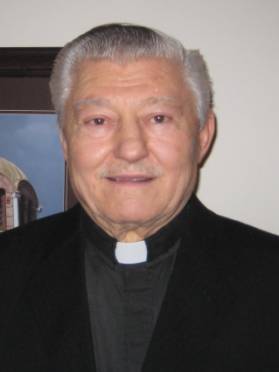 Fr. George C. Papademetriou was born on April 11, 1932 in Petralona, Evrytania, Greece, to devout parents: Rev. Constantine and Presvytera Ourania Papademetriou. He comes from a long line of priests.

Fr. George arrived in the United States as a young boy with his mother Presvytera Ourania, sister Olga Marudas, and brothers Rev. Spyridon, John (who as an American soldier was killed in action in Korea), Evangelos, and Alkiviadis. (His father, Rev. Constantine, had already come to the United States.) He attended high school in Moline, Illinois, where his father served as a priest at St. George Greek Orthodox Church. In his senior year of high school, his father was transferred to St. Anthony’s Greek Orthodox Church in Clairton, Pennsylvania, where Fr. George graduated from Clairton High School.

In 1959, Fr. George graduated from Holy Cross Seminary in Brookline, Massachusetts. In 1960, he married the former Athanasia Antoniou, and one month later, he was ordained to the priesthood by His Eminence Archbishop Iakovos, of blessed memory, at St. Paraskevi Greek Orthodox Church in Greenlawn, New York.

With the blessing of Archbishop Iakovos, he continued his graduate education. Fr. George was awarded a scholarship from the Taylor Foundation, and went on to receive a Master’s in Theology (Th.M.) in systematic theology from Texas Christian University; a Ph.D. in comparative philosophy and philosophy of religion from Temple University; and a Master’s in Library Science from Simmons College.

Fr. George served as professor of theology and Director of the Library at Hellenic College/Holy Cross for many years. Under his leadership, a new library building was planned and construction was started. As a professional librarian, he introduced computers to the Library. With Presvytera Athanasia, also a professional librarian and cataloger, he undertook the challenge of retrospective cataloging of the entire collection, which was especially difficult because a large portion of the collection is in Greek. Presvytera Athanasia is also the author of Presbytera: The Life, Mission, and Service of the Priest’s Wife.

Fr. George has engaged in dialogue with many different religions and has dealt with inter-confessional and interreligious complexities throughout his ministry. He served on the National Conference of Christians and Jews (and now Muslims), educating and influencing many students in the area of interreligious relations and dialogue and acceptance and tolerance of others. He defended the Orthodox faith in a language that avoids the negative tone of theoretical arguments. In addition to his inter-faith work, he established an expertise on cults and has lectured widely in this area.

Fr. George retired from full-time service as a priest and professor in 2003, and currently serves parishes in the New England area.

Fr. George and Presvytera Athanasia reside in Needham, Massachusetts, and have three grown children: Constantine (Dean), a lawyer and the publisher/owner of Somerset Hall Press in Boston; Jane P. Kourtis, married to Nicholas F. Kourtis, both lawyers in Boston; and Anastasios (Tom), a Professor of History and Director of Hellenic Studies at Stockton College of New Jersey, and married to Dorrie (Mulopulos) Papademetriou, a graphic designer and author/illustrator of several children’s books, including Celebrate the Earth (based on psalm 104); The Story of Mary; and North Star: Saint Hermann of Alaska. Fr. George and Presvytera Athanasia are also blessed with four grandchildren: Anastasia (Stacey) and Susan Athanasia Kourtis, and George and Roman Papademetriou.