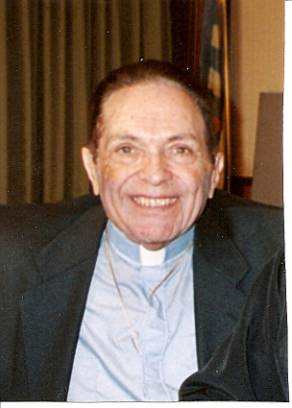 Father George Economos was born in Defiance, Ohio, in 1922 to Margarita (Kostopoulos) and Nicholas George Conomos (Papaeconomou).  George’s father was born in Kolline, Arcadia, Greece, and came to America at 18 in 1896. Fr. George’s paternal great-grandfather was a Greek Orthodox priest, Polydoros Papaeconomou, and he descended from 13 generations of priests.  George’s paternal grandfather ran in the Marathon in the first modern Olympics in Greece. George’s mother was born in Stemnitsa, Arcadia, Greece, and came to America at 18 in 1911. George’s maternal uncles, Vasilios and Anargyros Kostopoulos, arrived in Toledo, OH in 1899, and were in business as confectioners. While Margarita worked in her uncle’s candy store in Toledo, she met Nicholas Conomos, who was a candy manufacturer. They were married on January 24, 1915 in Toledo by Rev. Pericles Papavasileon, and made their home in Defiance.  On June 9, 1915, Vasilios Kostopoulos was one of the signers of the Certificate for Incorporation of the Holy Trinity Church in Toledo. George had an older sister, Evelyn (Eugenia) and has a younger sister, Grace (Chrisafo).  George grew up helping his father in his candy store.

After graduating from Defiance High School in 1940, he began studies at Defiance College.  His mother heard about the Holy Cross Seminary and encouraged her son to enroll. He began his studies in Greek with the Toledo priest George recorded the exact time of his arrival in his book entitled SUNEKDUMOS ORQODOXOU CRISTIANOU HTOI MEGALH IERA

SUNOYIS“ arrived at Pomfret Center, Conn. 7:30 PM May 18, 1941”.  He earned a Diploma in Theology with the 6th graduating class of Holy Cross Theological School on June 19, 1947.  He continued his education with graduate studies at Michigan State University and University of Arizona. From 1947 to 1948, he was a Greek School Teacher at the Holy Trinity Church in Danielson, CT.

In Boston, he met Theodora Nicholas Stamatos. They were married by Fr. Demetrios Coucouzis (the future Archbishop Iakovos) and Archbishop Cavadas on February 20, 1949 at the Annunciation Cathedral. Theodora and George were blessed with four children:  Margaret, Catherine, Nicholas and George, granddaughter Martina, and 2 great-granddaughters, Krizia and Nikolette.

He gave to each community his best, and contributed to furthering the faith, e.g. by participating in an Inter-racial and Inter-faith Goodwill Service, and with Archbishop Michael in September 1955, signing the proclamation that Greek Orthodoxy was a major faith. His beautiful tenor voice made all services spiritually uplifting.

Father George served in a variety of capacities including GOYA Spirituality Leader, Immigration Department as appointed by Gov. Leader of Pennsylvania, Aide to Gov. Soapy of Michigan, Public Relations Committee for Mayor Daley of Chicago, HANAC Board of Trustees of New Jersey, Jersey City Board of Education, Jersey City Housing Authority, and Advisory Committee for the Mayor of Jersey City.  He is responsible for Public Relations for the Pan Arcadian Society of New Jersey. And he has been a member of AHEPA for over 50 years.  He is on the Board of Directors of the Lincoln Association of Jersey City.

He first traveled to Greece in 1955 with Presbytera on the Queen Frederica and served as the ship’s chaplain. George also went to the Patriarch in Constantinople, and observed the tensions that led to the Turkish Program against the Greek population of Constantinople during September 6-7, 1955.

Now he continues to serve by helping others in whatever way he can. He enjoys photographing family and friends, and bringing back happy memories by preparing photo albums and sharing pictures with others. He returns often to see the progress of Holy Cross on the Hill, and is inspired and inspires students and faculty, and finds great peace in the chapel services.