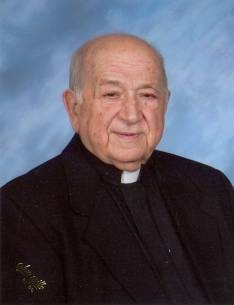 Father George N. Bartz was born in Jackson, Michigan on July 29,1923 to Nicholas and Zoe Bartz. He was the oldest of four sons: Peter, Thomas, and James.

He graduated from Jackson High School in 1941. He attended the University of Michigan for two years and then Holy Cross Greek Orthodox Theological School from which he graduated in 1947. He also attended Scranton University (Pennsylvania) 1952-1954.

He married Zafera Hadgigeorge in Youngstown, Ohio on June 27, 1948. Following his ordination to the Holy Diaconate on July 25, 1948 and to the Holy Priesthood on September 5,1948, he served as Pastor of St. Nicholas Church in Youngstown, Ohio until 1951 and then at the Annunciation Church in Scranton, Pennsylvania from 1951 to 1956. On September 1, 1956, he began his 38 year pastorate at the Annunciation Church in Akron, Ohio.

Under his pastoral leadership, the parish grew in spirit, in membership, in programs, and in property, as evidenced with a new Sunday School building and Community Center. The interior of the Church was enlarged and completely renovated with handwritten icons, greatly enhancing the worship experience for the faithful.

The list of activities and organizations he established in the Akron parish are as follows:

In the Greater Akron area, his involvement included:

His work, especially with the children of the Parish, was obvious. When the Diocese Camp was held at Mount Tabor in Uniontown, Pennsylvania, the lion's share of campers were always from Akron. Father George and Presvytera Zafera would visit for a few days and help around the camp.

Along with his impressive ministry, he was a loving father to his four children and their spouses: Zoe and Dan McClish, Father Bill and Emily Bartz, Pamela and Paul Plumis, and Nicole and Father Costas Keares. He was proud grandfather of Robert and Tammy McClish; Jonathan McClish; Joanna, Maria, and George Bartz; Katherine, Kristina, and George Plumis; and Peter and Christina Keares. He has one great-grandson, Daniel McClish, and two step great-grandsons, Stephen and Michael Gaglione.

Father George said, "People are my hobby," evidenced by the many varied lives he touched in his neighborhood, the Annunciation Parish, the Akron community, the Metropolis of Pittsburgh, the Archdiocese of America, and the international community of the Ecumenical Patriarchate.