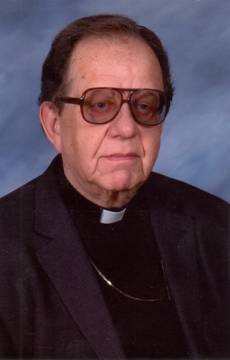 Fr. Fred was born (12/15/29) and raised in Cedar Rapids, Iowa. Both his parents, George and Anna, came from Platanos, Samos.

From an early age his only desire and dream was to become a priest of the Church.  He enrolled at Holy Cross in the fall of 1947. His first year class was the last class to attend at the Pomfret, Connecticut   location. One year at Pomfret was followed by four years at Brookline, Massachusetts, graduating in 1952.

He married Nika Panos (Panoutsakopoulos) on July 3rd, 1955, and was ordained a deacon on July 27 and was  ordained a priest in his home town on August 7th (the first Greek American priest from the state of Iowa). Officiating “episkopos” at both ordinations was Bishop Ezekial Tsoukalas. Father Fred’s first parish was at the Assumption in Bayard, Nebraska, where he served Orthodox Christians scattered throughout Western Nebraska and South Dakota.

In December of 1958, he was transferred to Saint Dionysios’ Church in Kansas City, Kansas, where he remained for ten years. In addition to his local pastoral duties, he served as chaplain to Orthodox students at Kansas University, and also as chaplain at the Federal and State Penitentiary at Leavenworth, Kansas. For a period of four years he was president of the Ministerial Alliance.  He appeared frequently on local television in a panel discussion group and had a weekly radio program.

In September of 1968 Father Fred was transferred to Saint Katherine’s Church in Redondo Beach, California and served there for 25 years, retiring in June of 1993. During his tenure at St. Katherine’s, Father Fred served on the Board of Directors of the Guadalupe Home for Boys (presently the Holy Trinity School for Children) both as treasurer and president. He also was on a radio program with other clergy, “Religion on the Line,” in which callers would ask questions of the clergy. A major building program came to fruition at Saint Katherine’s in 1974 with the construction of a community center, a multi-purpose room, and additional classrooms.

Upon retiring in 1993, Father Fred and Presvetera Nika went to Kansas City, Missouri for a period of ten years. Each Holy Week of those years he served parishes throughout the Metropolis of Denver in Craig, Colorado; Souix Falls, South Dakota; and in Overland Park, Kansas. In 2003, Father and Presvetera moved back to Redondo Beach to be near their family, sons George and Milton David, and their four grandchildren. Presently he assists, as needed, in his former parish.