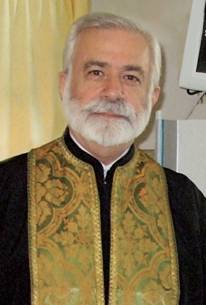 In 2001, Fr. Emmanuel founded Orthodox Witness, a not-for-profit organization dedicated to Orthodox Evangelism, particularly through the modern means of communication. Fr. Emmanuel brought several high-profile speakers to St. Louis for annual Orthodox seminars. He established www.orthodoxwitness.org, and the group has published four books thus far: The Heavenly Banquet: Understanding the Divine Liturgy (by Fr. Emmanuel), Preaching Another Christ: An Orthodox View of Evangelicalism, a letter by St. Theophan the Recluse, and two other translations, The Garden of the Holy Spirit: Elder Iakovos of Evia, and Papa-Dimitri: The Man of God. Fr. Emmanuel’s second book: Jesus: Fallen? The Human Nature of Christ Examined From an Eastern Orthodox Perspective, is due to be published in 2011.

Over the years, Fr. Emmanuel has written several original Christmas plays including: “Daniel and the Three Youths”, “Prophecies Announcing Christ”, and “Christmas Eve.” Each play is highlighted with original Orthodox Christmas songs and carols (in English), which were written, arranged or composed by Fr. Emmanuel. He has also written a musical, “The Three Wise Men”.

Fr. Emmanuel has composed many original Orthodox Christian songs for the Orthodox youth, and two Divine Liturgies. Books and CDs of these compositions are forthcoming.

Father Emmanuel plans to keep writing in his years of “retirement”.