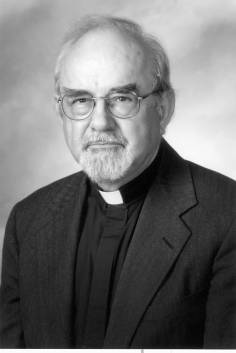 The Rev. Father Demetrios J. Constantelos, Ph.D., D.D., is a retired presbyter of the Greek Orthodox Archdiocese of the United States, and the Charles Cooper Townsend Sr. Professor Emeritus of History and Religious Studies, and Distinguished Research Scholar in Residence at the Richard Stockton College of New Jersey, Pomona, N.J.

The fifth child of Christine and Ioannis Constantelos, he was born in Spilia , Messinia, Greece (July 27, 1927). He received his elementary education at his home town and graduated from the Gymnasion of Kyparissia. He came to the United States on a scholarship from the Greek Orthodox Archdiocese of America. He was educated at Holy Cross Greek Orthodox Theological School (B.A.Th.) Princeton Theological Seminary (Th.M.0) and Rutgers University (M.A., Ph.D). He has also attended classes at the University of Michigan (Fall Semester 1951) and the University of Athens (1954­1955).He was ordained deacon by Archbishop Michael on July 3,1955, and presbyter by bishop Demetrios of Olympos on July 13, 1955. His first assignment was at Saint Demetrios of Perth Amboy, N.J. In the course of fifty years he has served either as regular or visiting pastor, several other Communities. He is the founding priest of Saint Barbara, Toms River, NJ; Saint Anthony, Vineland, NJ; and Holy Trinity, Egg Harbor, NJ, which he served between 1972 and 1996.

For forty years,Rev. Dr. Constantelos has taught at Rutgers University, Hellenic College, Boston College, New York University, and Richard Stockton College of New Jersey. He is the author of several books, many studies, essays and reviews that have appeared in more than forty periodicals in the United States and abroad. His most important books include Byzantine Philanthropy and Social Welfare, 1968, 2nd ed.1991; Poverty, Society and Philanthropy in the Later Medieyal Greek World, 1992;Christian Hellenism, 1998; Understanding the Greek OrthodOX Church: Faith. History and Practice, 2005; Christian Faith and Cultural Heritage: Greek Orthodox Perspectives, 2005; Renewing the Church: The Significance of the Council in Trullo, 2006; The Greeks: Their Heritage and Its Value Today, 2nd edition, 2006. Interrelationship between Christianity and Hellenisim, in Greek, Athens, 2008. Six of his books and several studies have been translated and published in Greek and other languages.As the designated editor of Archbishop Iakovos' s writings, he has edited and published five of the Archbishop's writings in Greek and four in English. Two of his own writings are scheduled to be published in Thessaloniki in 2008. In the course of some fifty years, he has served on various committees of the Archdiocese and the academic world. He continues to serve as Associate Editor of the Journal of Ecumenical Studies and on the New Revised Version Bible Committee.

Father Constantelos is married for fifty three years with Stella Croussouloudis of New York and Chios. They are the parents of four children: Christine, a Rutgers University graduate in plants pathology, John, a Tufts, Johns Hopkins, and Duke (Ph.D) Universities graduate in political science and international relations; Eleni, a Colgate University graduate in literature and theater arts, and Maria, a Bergen College graduate in pre-school education. Father Constantelos and Presvytera are the happy grandparents of six. They reside in Linwood, New Jersey.

Eastern Orthodox Chaplain for the students of the Colleges and Universities of greater Boston, 1970-1971.