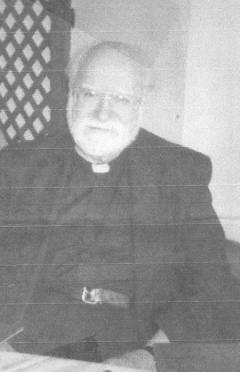 Constantine attended St. Elizabeth R.C. Grade School (graduated 1932), and attended West Denver High School (graduated 1936). During these years he also attended the Greek Afternoon School of Koimisis Parish of Den­ver. He also attended one year in the School of Engineering at the University of Colorado at Boulder, Colorado, with the intention of pursuing an Electrical Engineering course there (1936-1937).

Constantine graduated from the Holy Cross Theological Seminary in 1942. During his senior year be worked as a full time secretary to the Dean, and was assigned to reorganize and head the Adelphaton Department, a position he held until May of 1943.

Constantine married Joy Seferlis of Springvale, Maine on July 18th 1943 with Bishop Cavadas officiating. He was ordained a Deacon on August 15th 1943 in the Church of Sts. Constantine and Helen in Ipswich, Mass, by the then Dean of the Seminary, Bishop Athenagoras Cavadas, who was also the Bishop of Boston On September 1943 Deacon Constantine was ordained a Priest by the then Arch­bishop Athenagoras who later became the Ecumenical Patriarch of Constan­tinople.

1. The Holy Apostles, Peter and Paul, Greek Orthodox Church in Haverhill. Massachusetts, from September 1943 to June 1952. While there he also taught in the Greek-Afternoon School. He also served as Secretary of the Greek Orthodox Ministerial Association of New England, whose President was the Pastor of the Boston Cathedral, the late Archbishop Iakovos.

2. The Saint George Greek Orthodox Church in Toronto, Ont. Canada from July 1952 to October 1959. While there he also served the Greek Orthodox communicants in all of Ontario, until Parishes were formed in London and Hamilton Ontario, which he helped to organize. He organized a Boy Scout and a Girl Scout Troop in Saint George Parish, and became the first Scoutmaster of the Boy Scout Troop. He organized the youth of the Parish into two groups, the Canadian born GOYANS and the Greek born GOYANS, and eventually brought the two groups into one.

4. The Saint Demetrios Greek Orthodox Church in Upper Darby, PA. from September 1973 to September 1979. As the senior Greek Orthodox Priest in the Philadelphia area, Fr. Andrews was appointed by His Eminence Archbishop Iakovos to be his personal representative on the Host Committee of the 23rd Biennial Clergy-Laity Congress held on the week of July 4th 1976 in Philadelphia, P A. Father Andrews was also appointed as Chairman of the Church Events Committee of this Clergy ­Laity Congress.

4a. Fr. Constantine also served as Chancellor of the Detroit Diocese under Bishop Timothy (Negrepontis) from September 1979 to August 1980.

5. The Saint Sophia Greek Orthodox Church of Norristown, PA. from November 1980 to October 1984. In November 1980 His Excellency Metropolitan Silas assigned Fr. Andrews to serve the Greek Orthodox Christians of Norristown and surrounding areas. Then good Christians here had purchased a small church and were served occasionally by Clergy coming from the Philadelphia area.

Through the efforts of Fr. Andrews the parishioners on December 7th 1980 accepted the Uniform Parish Regulations of the Greek Archdiocese, and as a result the Parish was officially recognized as one of the Church Communities of the Archdiocese and of the Diocese of New Jersey under Metropolitan Silas. Fr. Andrews helped organize the Onomatodosia Event on May 17th 1981 at which Metropolitan Silas officiated, and the Parish received the name of "Saint Sophia". While there Fr. Andrews organized the Church Choir, the Sunday School, the Ladies Society into the "Faith, Hope and Agape Philoptohos Society".

After his retirement Fr. Andrews was appointed by Metropolitan Silas as "Father Confessor" to the eight Parishes in the Delaware Valley.

In 1991 Fr. Andrews received the Citation for the Seminary Class of 1942 on behalf of the First Graduating Class, and responded on behalf of his classmates at the Fiftieth Commencement Exercises of the Holy Cross Orthodox Theological School in Brookline. Mass.

Degrees: BA in Theology G.O. Seminary Brookline, Mass.(1958). BD from Knox College in Toronto, Ont Canada (1958. Thesis: The Rise and Development of the Patriarchate of Constantinople. STM from Concordia Lutheran Seminary, St. Louis, Mo. in 1969. Thesis: The Concept of Morphosis in the Writings of Gregory of Nyssa.

Published: The Theory and Practice of the Holy Sacrament of Penance (A Practical Handbook for Confession for Greek Orthodox Christians).

English Translations: «The World Beyond the Grave, or The After Life" by His Eminence Archbishop Athenagoras Cavadas (1988, Holy Cross Orthodox Press). Published in Greece:"The Incarnation of the Word and the Theosis of Man" by Prof Elias D. Moutsoulas. "Pain" by Prof Georgia Kanavi.

Pamphlets Published: "An Eastern Orthodox Saint, Who Became a Western Legend, or The Truth About St. Nicholas" (1961). "Come and See" (In. 1, 46b), Mar. 1970 in The Eastern Orthodox Church Federation of Greater St. Louis, Mo. "A Brief Survey of Greek Orthodoxy" (1978, Upper Darby, Pa.). "Examination of Conscience in Preparation for Confession"