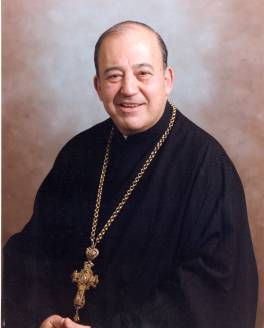 The Rev. Father Constantine Eliades, the first of three children of Dionysios and Kyriaki (nee Theodorou) who emigrated from Asia Minor, was born in New York City on May 10, 1933. He graduated from the Bronx High School of Science and attended CCNY (College of the City of New York) majoring in statistics. He was educated at Holy Cross Greek Orthodox Theological School (B.A.Th), Princeton Theological Seminary (Th. M) where under Dr. Samuel Blizzard he wrote his thesis "The Assimilation of the Greek Orthodox Church into American Society". He was ordained Deacon by His Eminence Athenagoras Kavadas on Graduation day June 2, 1957 and Presbyter by Bishop Germanos of Konstantia on June 27, 1957.

He is the founding priest of Saint Paraskevi in Greenlawn, New York (1957 to 1964) which he nurtured from 64 families to 450. He was instrumental in purchasing the 5½ acre site, creating the architectoral Byzantine plans and raising $125,000 for construction of the current Church. In 1964 he was appointed by His Eminence Archbishop Iakovos to organize the newly created Department of Research and Statistics. While there he published the monumental 1965 and 1966 Archdiocese Year Books which contained all the vital statistics of every Greek Orthodox Church in the U.S.A. and Canada. No such statistics have since been published.

In the course of his fifty-one years a priest he served as pastor of SS. Constantine and Helen Cathedral in Brooklyn, New York (1968 to 1973) where he in 1971 also became the Principal of the A. Fantis Parochial School which had 310 students in grades Kindergarten to 8th; as Pastor of Holy Trinity in Bridgeport, CT (1973 to 1983) where he was responsible for the painting of the 24 murals that adorn the Church and the consecration of the Church in 1978; and, as Pastor of Holy Cross, Whitestone, New York (1983 to 1994). Fr. Eliades was asked to return to the Archdiocese by His Eminence Archbishop Iakovos from 1994 to 1997 to be the first Director of the Archdiocese Pension Benefits Office which he was instrumental in establishing in 1973, the committee chairmanship of which he held for 12 years. He retired in 1997 but has been active serving many Parishes for months and years at a time, one of which is SS. George and Demetrios in New York where he has been for 4 years now.

His Eminence Archbishop Iakovos bestowed upon Fr. Constantine Eliades the rank of Economos in May 1971 and Protopresbyter of the Ecumenical Patriarchate in 1978.

In June of 1957 Fr. Constantine married his childhood sweetheart Kanela Poulis of New York City at the Cathedral of the Holy Trinity. They were blessed with three children, Daniel, Calliopi and Joanne, nine grandchildren and two great-grandsons. Presvytera Kanela fell asleep in the Lord on March 2,2005, three days after he 70th birthday and fifteen months before her 50th wedding anniversary. May her memory be eternal.
Of his many accomplishments Fr. Constantine Eliades is proud of his 37 years as a Chaplain in the Veterans Administration; of his 23 years as priest at Ionian Village in Greece serving under all the five directors; of his leading 7 pilgrimages to the Holy Lands and the Patriarchate; of his 6 years as the Greek Orthodox staff Chaplain at Saint Vincent's Hospital in Bridgeport, CT; of his establishment and as President of the Greater Bridgeport Orthodox Council comprised of the 7 Orthodox Churches in the area; of his service as Secretary of the Archdiocese Presbyters Council (1970 to 1974); of his 12 years as President of the Archdiocese Spiritual Court; of his establishment of a Boy Scout Troop at each of the three Churches he served; of his completion at the Hillcrest Psychiatric Hospital in Portland, CT. of the requirements for certification as a Family Counselor; and lastly as a Board Member of the R.C.A. (Retired Clergy Association) since 2004 and as Secretary since 2006.