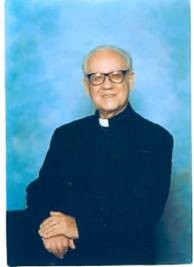 Father Charles acquired a very early interest in and love for the Church as an alter boy, Sunday school student and Greek school students. During his active high school years he directed and appeared in numerous Greek school plays. After considering possible careers as an English Teacher and engineer, he decided in his senor year to enter the priesthood.

In September, 1939 after graduating from Lowell High School, where he was a member of the track team, he entered Holy Cross Seminary in Pomfort Connecticut. While a seminarian, he was a baritone member of the Byzantine Choir, which toured different Greek Orthodox Churches singing praises to the Lord. He graduated in June 1944, with twelve other students as the third graduating class of the seminary. 1944 was a memorable year for Father Charles. On July 29, following his graduation from the seminary with honors, he married his high school sweetheart Miss Athena Eliades. In October of that same year, He was ordained a deacon in his wife’s hometown, Jersey City, New Jersey. Two weeks later he was ordained into the holy priest hood in McKeesport Pennsylvania by Bishop Germanos. His first church, Saint George in Oklahoma City, Oklahoma was assigned to him in December of that same year. While in Oklahoma, Father Charles and Presvytera were blessed with twin sons. Peter and Ernest, born March 20 1947. In 1948 Father Charles was assigned to Saint Demetrios Church in Jersey City, New Jersey, the same city in which he was married. In 1950 he became the Priest of Saint George Greek Orthodox Church in Greenville, South Carolina, where he remained until 1964. While in South Carolina Father and Athena were blessed with another son Charles Alexander born November 11, 1951.

Father Charles was instrumental in starting a series of lectures among priests in Charleston, Columbia South Carolina and Savannah Georgia. These lectures were held monthly and featured the local Priest, as the principal speaker and the other priests as panel members. The parishioners eagerly attended these monthly sessions.

Shortly after becoming a priest, Father Charles was recognized for his outstanding contributions to our faith with the commendation from Archbishop Michael.  In 1964, he received the Ofikion Title of Protopresbyter from Archbishop Iakovos, the highest award that a married priest can receive.

On August 1, 1964 Father Charles assumed the duties as pastor of the Annunciation Greek Orthodox Cathedral in Norfolk Virginia, where he served with a strong sense of purpose, and a true conviction of faith until he retired on October 31, 1986.  In 1969, his twenty-fifth year as a priest, the Philoptochos Society awarded him a Pectoral Cross.

In his twenty-two years in Norfolk, he inspired our Parishioners to work closely and harmoniously together.  During that period our Church and Community has become one of the largest and most influential Greek Orthodox Communities in the country. His specific contributions and accomplishments are too numerous to mention.

As a role Model, Father Charles has had a significant impact on a number of individuals who have followed in his footsteps.  His Younger brother Father Homer Goumenis and both his nephews Father Peter Makris and Father Frank Marangos answered the call from God. While in Oklahoma City he was instrumental in both Father Constantinos and Nikitas Pallasis to become priests. On his recommendation to the Archbishop, he brought Father Savas Constantinou into the holy priesthood.  Growing up in his congregation in Norfolk Va., Father Nicholas George Bacalis was inspired to join the priesthood due largely to Father Charles religious influence.

Father Charles has touched in a positive way all those around him, both young and old. He motivated the members of our community as our spiritual leader, he made life more meaningful for all those he touched and his memory is felt in the Cathedral as an inspirational leader.

May his Memory be Eternal.