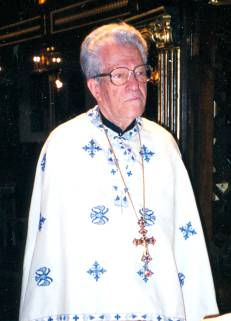 Father Anastasios Bandy, who died Saturday, February 25, 2012, was a faithful and devoted priest, a professor of many years, and an accomplished scholar. He was 91, a native of Philadelphia and died at Philadelphia's Hahnemann University Hospital. He was the son of Constantine and Paraskeve Boyiatzis, both born in and immigrated from Berat, or Beration, in Albania. During the Byzantine Empire Berat, a city in northern Epiros, was known as Bellegrada.

Father Anastasios subscribed to this trilogy, which became manifest in his active life. He was a person of faith, a faith he maintained by conviction, not out of inheritance; he was a person of virtue which could be discerned in both his pastoral diakonia and academic career; his humility, simplicity, unpretentious ways, and his relationships with all kinds of people, not only the wealthy and the powerful. His faith and his virtue received much support from his knowledge, both "iera" and "thyrathen" as Church Fathers would call it. His knowledge led him to write and contribute important studies in the field of Greek classics and Christian-Hellenic studies.

Father Anastasios was a pioneer of priests of the Greek Orthodox Archdiocese who have been characterized as our scholar-priests. As one of the early graduates of our old Holy Cross Theological Institute in Pomfret, Connecticut, he set an example of a person of faith, virtue, and knowledge that several other Holy Cross graduates followed. He attended Holy Cross from 1940 to 1945 when he received a diploma in theology; nearly two months later he married Anastasia Kertiles, his devoted wife of 67 years. He was ordained a deacon on August 19, 1945 by Athenagoras Kavadas, the unforgettable Bishop of Boston and first Dean of Holy Cross; on October 5 of the same year, he was ordained presbyter by Germanos Polyzoides, Bishop of Nyssa, a simple, humble, genuine, a sympresvyteros as some Church Fathers, like St. Basil and John Chrysostom, would describe him. Bishop Germanos was also the author of several educational books.

As priest Father Anastasios served the Hagia Sophia Greek Orthodox Church in San Antonio, Texas [1945-47], St John the Theologian in Jacksonville, Florida, (1947-1949) and St George Antiochian Orthodox Church in Philadelphia from 1951-1958. From 1959 to his retirement he had several temporary appointments in California and the Metropolitan Philadelphia area.

While serving the needs of the small Community of St. George of the Antiochian Episcopate, he was able to pursue post graduate studies. He received degrees in philosophy and the Greek and Latin classics from La Salle College [A.B.] and the University of Pennsylvania (A.M., Ph.D.). He accepted a teaching position at the University of California, Riverside, from which he retired in1981 as professor emeritus. Upon his return to Philadelphia, he became a lecturer in Classics at Villanova University between Sept.1984 and June 1990. During his academic career he received several honors, grants, fellowships, including a Dumbarton Oaks Visiting Fellowship, the American Council of Learned Societies, the American Philosophical Society and other. Father Anastasios wrote and published several studies, essays, articles and reviews in professional periodicals. Here I will mention only a few.

He published his The Greek Christian Inscriptions of Crete, Athens 1970, which received favorable reviews by experts. His critical review of M. Carpenter's Kontakia of Romanos published in the Classical World and his "Addenda et Corrigenda to M. Carpenter's Kontakia of
Romanos in Byzantine Studies contribute to a better understanding of Romanos Melodos hymns in English translation. In the same area of philological and linguistic work was his translation of six of the monastic typika, a project sponsored by the Dumbarton Oaks Center for Byzantine Studies.

Father Anastasios' scholarly work, which will be used by Byzantine scholars for many years to come is his critical edition and translation in English from the original Greek of loannes Lydus, Περί Αρχών της Ρωμαίων Πολιτείες - On the Magistrcies of the State of the Romans, published by the American Philosophical Society in Philadelphia, 1983. loannes Lydos was born in the city of Philadelphia in Lydia, Asia Minor, and his book is replete with historical, religious and much information on Roman and Greek-Byzantine culture, information on old Rome and Sacred Rorne - ιερά Ρώμη, Constantinople.

The pastoral and academic work of Father Anastasios Bandy confirm what the late Archbishop lakovos wrote on some other occasion that a scholar- priest of faith and training can serve successfully both the altar and the academic chair. Father Anastasios and a few more scholar-priests such as Father George Tsoumas, Father Nomikos M. Vaporis, Father John Romanides and Father Nikon Patrinakos, to mention those who served the Church as active priests and scholars, should not be forgotten.

Father Bandy is survived by his presbytera, an accomplished person herself, his colleague and typist, as he used to say, a brother, nephews and nieces. He was a good man.