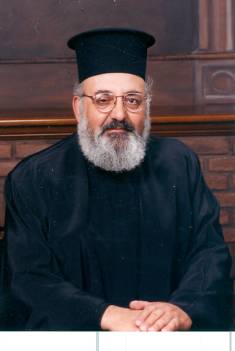 Father Anastasios Diacovasilis was born on the Island of Nisyros, one of the Dodecanese Islands on February 29, 1936. He finished the elementary and middle school in Nissyros and graduated high school in Rhodes. He was the son of Paschal is and Eleni Diacovasilis. He served in Greek Royal air force for twenty seven months. In 1959 he enrolled in the ecclesiastical Seminary and graduated with arrista.

He served as cantor at Saint John Church on island of Rhodes. Also he served as educator of the Boys Orphanage Institution in Rhodes. In 1960 he married his Presvytera Maria Hartofilis and they have three children Eugenia, presently Presvytera of Father Nicholas Samaras, Helen Serchiou married to Michael and Paschalis married to Myrofora Georgiou.

He arrived in America on April 9, 1963 and immediately undertook the duties of cantor and Sexton at the parish of St. Demetrios in Astoria. On March 9, 1975, upon the request of Archbishop Iakovos of North and South America, he was ordained to the Deaconate by His Grace Philotheos of Meloa. The following Sunday Father Anastasios was ordained Presbyter  at the church of Saint Elpis, Hope Well, Virginia by His Grace Bishop Aimilianos of Harioupolis where he served for 2½ years. In September 1977 he was transfer to the Cathedral of Saint Sophia in Washington D.C as Assistant Priest. He served for seven consecutive years and captured the love of all the parishioners, who to this day express their esteem in many ways.

In January 1984, Fr. Anastasios was transferred to the Saint Nicholas Shrine Church in Flushing NY, where he is working as retired priest. During his 35 years as priest received the titles as pneumatikos, Sakellarios and Economos from His late Archbishop Iakovos of North and South America. When it comes to poetry he has a natural talent. He has published two books of poetry, Piitika Stahiologimata and Piitiki Antholo­gy. Today he resides in Bayside, New York with his Presvytera Maria. They enjoy their six grand children and one of his Sons-in-law who is a priest at Saint Constantine and Helen Church, West Nyack, N.Y.