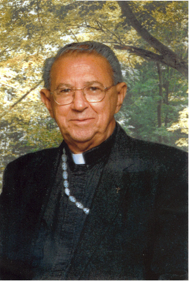 The Very Reverend Archimandrite Anastasios Constantine Blougouras (Fr. Ernest)was born May 1, 1932 in Dover New Hampshire,the youngest of seven children of Constantine and Theamando Blougouras.His father was from the town of Menia, in Messinia, Greece and married Theamando Politis who was from the Messina village of Methoni. They married in Greece and immigrated to the United States in 1911, settling in Dover where Mr. Blougouras was a construction worker. Fr. Ernest is one of seven children. His parents and siblings are deceased. Father Ernest had many nieces and nephews, and they and their children complement the family that Constantine and Theamando started here in America.

Father Ernest graduated from Dover High School in 1950. He played the French horn in the high school band, served as a delegate to Boys' State was on student council, the cross-country team, and was a member of the debate team and National Honor Society. He was active in the Annunciation Greek Orthodox Church in Dover. He received his calling to be a priest while still in high school and was encouraged in this by two priests who served the Dover parish, Fr. Nicholas Hatzivasiliou and Fr. Parakevas Theophrastou.

Determined to devote his life to the service of the Holy Orthodox Church, Ernest Blougouras entered the Holy Cross School of Theology in Brookline, Massachusetts in the autumn of 1950 and graduated with the class of 1956. After attaining a Bachelor of Theology degree, he received a scholarship to the University of Athens, graduating three years later with a Master of Sacred Theology" While in Athens he lived at the theological Center of the Church of Greece and had the opportunity to travel throughout the lands and cities where Orthodox Christianity was nurtured. His travels included Mt. Athos, Antioch, Jerusalem', Alexandria, Mt. Sinai, Beirut, Cairo, and Constantinople, where he received the blessing of His All Holiness Patriarch Anthenagoras.

Returning to the United States, he was ordained on November 19, 1959 to the Diaconate at Holy Cross Theological Chapel in Brookline, Massachusetts and to the Holy Priesthood on November 29, 1959 by Bishop Athenegoras of Boston (later Archbishop of London). The ordination was at the church of the Dormition of the Virgin Mary in Somerville, Massachusetts.

Two days after his ordination, Father Ernest was assigned as the first fulltime priest of the newly established church of St. Demetrios in Newton Lower Falls, Massachusetts. After two years, he became pastor of the Holy Trinity Church in Grand Island, Nebraska. This was a considerable change from a compact parish in the populous east to a far-flung prairie community.

In the fall of 1963 he was transferred to the Assumption Church in Flint, Michigan to help complete the building of a new sanctuary. Fr. Constantine Mersinas, the current pastor of St. Katherine Greek orthodox Church in Naples Florida, served as Fr. Ernest's altar boy during that time.

On September 15, 1967, Fr. Ernest was assigned to the Annunciation Cathedral in Detroit at a difficult time in its history. The old church buildings on Macomb Street had been taken by the city, the new cathedral was literally a hole in the ground where a foundation was being prepared, and the parish was financially insolvent. It was a bleak beginning, but with hope, courage, prayer, and hard work, and above all, the Grace of God, the community survived and the cathedral  completed. Fr. Ernest spent twenty-one years as their cathedral dean and was elevated to the ecclesiastical high rank of archimandrite in 1980 by Bishop Timothy of Detroit.

On August 17,1988 Fr. Ernest was assigned to the Cathedral of St. John the Theologian in Tenafly, New Jersey. His talents of building churches and helping communities through their precarious times would not go to waste. He put his skills as a parish priest to work yet again in providing the leadership for the construction of a new cultural center and classroom building. Fr. Ernest spent ten years leading the faithful of St. John Cathedral where he retired from full-time service on November 29, 1999.

Father Ernest has earned much respect wherever he has gone and his honors have reflected favorably on his parishes and on the Greek Orthodox Church in general He was always active in leadership roles in various presbyter councils of Orthodox and interfaith, at the local, regional and national levels.

Fr. Ernest has been a leader of innumerable community, ecumenical, and church-based initiatives and committees. A few of these include:

Upon retirement, on January 10, 1999, Father Ernest decided to head south to Florida to be near his nephew Charles Carlton and wife Kathleen, and became an active member of the St. Katherine Orthodox community in Naples.

Fr. Ernest was presented the "Metropolitan's Choice" Clergy Award in 2008 by His Eminence Metropolitan Alexios of Atlanta for his "extraordinary, faithful, and unceasing ministry" who continues to distinguish himself"in the advancement of the aims, purposes, and diakonia of the Greek Orthodox Metropolis of Atlanta."