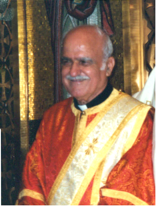 My name is Archdeacon Evripides P. Christulides. I was born on September 15, 1924, in Angastina, a beautiful village in Cyprus, but enslaved by the barbarian Turk since 1974 when the cowards invaded the island. My parents were Panayotis and Elpiniki Christodoulou. They farmed. They are both blessed memories. They had 11 children but only eight of us lived at one time. I was the third from the bottom of the list. Now only my brother George who lives in Steubenville, Ohio, and I are alive.

I came to the U. S. A. in September 1949 on a Student Visa and enrolled at Geneva College, Beaver Falls, Pa. I graduated in 1953 and earned a BS degree in Industrial Engineering. On May 6, 1953, Mary G. Kapourelos and I were married at the Saint George Church in Chester, Pa. The late Fr.Sophocies Sophocles performed the sacrament. On September 3, 1953, I was hired by NABISCO INC and stayed with them for 33 years. I worked in various of their manufacturing plants, In such cities as Philadelphia, Pa., Portland, Me., Atlanta, Ga., and Pittsburgh, Pa. where I stayed for 25 years. and retired in 1986.

Mary and I were blessed with two children. Our daughter Elpiniki Altum and our late on, THE LATE Fr. George Christudes, who left us on St. Luke's Day, on October 18, 1979.

At the time of his passing away, Fr. George was teaching at the Holy Cross Theological Seminary and was also serving as a second priest at Saint Vassilios Church in Peabody, Mass, where his great grandfather, Fr. Vassilios Daskalakis had served as a priest in the early twenties. When he passed away he left us a little baby girl named Thespina who is a 25 year old young lady. She is studying music at the Indiana University. With her mother, Presvytera Rosalia, they have been directing the Holy Cross Church Choir in Pittsburgh, Pa. for several years.

We have two other grandchildren from our daughter, Mary and Christopher. Both graduated from college and are both working, by the grace of God. While George was at Holy Cross, Mary and I had the blessing to meet his Eminence Archbishop Demetrios, who at that time he was a professor at the Seminary.

DEACONESS, Mary Kapourelos Christulides, was born in Chester, Pa. and when the Greek community built their first Orthodox Church, Mary taught Greek and Sunday School. Patriarch Athenagoras, who was the Archbishop of North and South America at the time, urged her to enroll at the Hellenic School and become a Greek school teacher but family obligations prevented her. At the time she had four brothers all serving in the United States Armed Forces and her father need help in the business. After we were married and moved to Pittsburgh Mary taught Sunday School at Saint Nicholas Cathedral She worked as a librarian at the Pennsylvania School for the Deaf for 18 years. She participated regularly in the yearly Walk to raise funds for the Nativity of the Theotokos Monastery in Saxonburg, Pa. She had served for very many years as a counselor at the Pittsburgh Diocesan Summer Camp.

I graduated from the American Academy in Larnaca, Cyprus, in 1945. The Academy is a Christian Mission School affiliated with the Reformed Presbyterian Church in the United States, and all students are required to take Religious Education courses at least one period a day. During the four years I was there, we studied for one year the following subjects, "The Acts of the Apostles", "The Holy Gospel according to Saint Luke", "The Old Testament" and "Christian Ethics".

Upon graduation, I was hired by the American Academy and taught there for four years and in 1949, I came to the United States and enrolled at GENEVA COLLEGE, Beaver Falls, Pa. Geneva is a Christian College and every graduate must complete four semesters (two years) in Religious Education courses - one year the study of the New Testament and one year the Old Testament. In 1966 I attended a 12 week course taught by the Late Bishop Gerasimos, when he was the Bishop of the Pittsburgh Diocese.

In 1965, Mary and I were assigned by the late Fr. George Scoulos, the Dean of the Saint Nicholas Cathedral, to visit every home in the area in Pittsburgh known as Oakland, and explain to the families who belonged to our Parish, the function and purpose of the "PLEDGE SYSTEM" which was replacing the old "dues" system Metropolitan Maximos appointed me to the "DIEOCESAN COUNCIL" and served for 29 years on various committees and on projects of various capacities, as directed by his Eminence. I initiated the fund raising system of the Pittsburgh Diocese and named it, "THE THREE HUNDRED SAINT PHOTIOS CONTRIBUTORS". By the end of the third year we were able to enlist 193 members who contributed $53,000.00, by then I retired. I served as the Diocesan Treasurer for a while and for a short period of time I replaced the Diocesan Chancellor who decided to serve a parish as their regular priest .

Once a month, for four years, I gave a sermon in Greek, on the Radio Station Program known as "The Hellenic Hour". This Radio Program has been serving the Tristate Area (parts of: Pennsylvania, Ohio and West Virginia) for over 60 years. I taught Greek School for three years and I served as the Chairman of the Cathedral Greek School for four years. I taught Greek for two years at the Reformed Presbyterian Seminary in Pittsburgh, Pa. I taught Sunday School for 22 years (1963 -1985) at the St. Nicholas Cathedral, under Fr. Scoulos and Fr. Serviou. I stopped teaching Sunday School because I realized that I could not reach the young people any longer. They thought of me as their grandfather. It was then that I devoted my time to improve my chanting under the tireless efforts of Fr. Sarantos Serviou.

In the fall of 1974, a group of us realized that the Cyprus refugees would not be allowed t go home for Christmas after the Cyprus invasion by Turkey. We were able to obtain a list of the refugee Cypriot children and on the Hellenic Radio Hour we announced the, FAMILY TO FAMILY HELP. WE encourage people to call the radio station and they would be given the name and the address of a refugee family who had children. The response was beyond our expectation.

In 1995, His Eminence, Archbishop lakovos, approved my application and his Eminence Maximos ordained me to the Holy Diaconate. I served at Saint Nicholas for seventeen years as a deacon. One of the responsibilities assigned to me was to visit, at least three times a year, our Orthodox Parishioners in Nursing Homes and those sick who lived at home.

I had a very special blessing when I served as a deacon at the Midnight Holly Liturgy Service at the
Holy Resurrection Church in Jerusalem, when we visited the Holy Land and the Holy Patriarchate.

I visited the Holy Mountain on three different occasions and at one time I spent the Holy Week, the Holy Resurrection and the Bright Week there. It was a very special Spiritual Experience.

In the year 2011, his Eminence Metropolitan Savas ofthe Pittsburgh Metropolis, eleated me to Archdeacon; a blessed experience! In 2012 Mary and I moved to Medford, N.J., where our daughter and her family live, and have joined the congregation of Saint Thomas Greek Orthodox Church and, whenever possible, I try to assist the pastor Fr. Emmanuel Pratsinakis, who has been of great help and assistance. Eventually I transferred to the New Jersey Metropolis and now I am under the pallium (omoforio) of his Eminence Metropolitan Evangelos.

I would like to conclude by saying that at every difficult situation I faced, by the Grace of God, a Samaritan showed up to helped me:

Dr. W. W. Weir, director of the American Academy helped me a lot to come to America. A total stranger by the name of Vasilios Kolovos, (Bill Columbos) singed and vouched to the United States Government that that he would be responsible for me. The people at Geneva College were very patient and generous, Nabisco, Inc., were very fair and appreciative, the Saint Nicholas Parishioners in Pittsburgh, Pa. were a joy and a spiritual reward working with them. Metropolitan Maximos and Metropolitan Savas were spiritual guiding lights.

I am very grateful to the U.S.A. I got off the boat in Boston, Ma., with $72.00 in my pocket. I never went hungry. I managed to graduate college and paid all my expenses. I was blessed with devoted and loving wife and raised two wonderful children. May God, our Lord, bless America and the people who live in it.