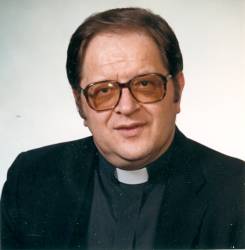 My name is Father Taxiarhis Dionisiou Vlahos. I was born in Stenoma Evritanias, Greece on November 17, 1939. My parents were Dionisios and Fotini Vlahos. At the age of 6 the communists took my father. I have not heard nor seen my father ever since. My mother raised me and my sister Maria age 3 years old. My mother was also pregnant at that time with my other sister named Nikantra. She was born in Karpenisi because we had to flee there as refugees due to civil war.

After the civil war, we returned to the village and there I completed the elementary school. From my youth, I was serving at the altar and I was helping the chanters. Having that inner desire to serve the church as a priest, I attended for five years the Ecclesiastic School of Lamia. I graduated from that school on June 25th 1965. Then, I returned back to my village and after a short stay there, the entire family moved to Athens to be close to my father's brothers, the late Fr. Panagiotis and George Vlahos.

On June 2nd 1968, I married Giannoula Konstantinou Skenteris from same village. On January 25th 1969 we moved to Fayetteville NC to be near my wife's brothers. My sister Maria married Spiro Triantafili in Athens. Afterwards, my mother and my other sister Nikantra came to be with us in the United States. My sister Nikantra married Gus Delenikas in Fayetteville NC. Afterwards they moved to Chicago Illinois. My first son Dionisios who is now 38 years old was born in Fayetteville. He is married to Sandy Tsouroudiakakis and they have 3 children. Their names are, Taxiarhi, Panos and Demetra. In the year 1973 we moved to Charlotte NC. In Charlotte, my second child named Fotini was born. She is married to George Zaharopoulos. They have one child by the name Ioanna Maria. Both me and my children we currently reside in Charlotte NC. When I came to the United States, I worked in the restaurant industry. In Charlotte, I opened my own restaurant.

However, my dream and my desire were to serve my church. I sold my business and my house and I returned to Athens Greece. There, with my diploma from the Ecclesiastic School of Lamia, I was ordained as Deacon by Metropolitan Mesogeas and Lavriotikis, Agathonikon on May 1, 1978 in the church of the Resurrection at Spata, Attikis. Thereafter, I attended the school of theology at the higher Ecclesiastical School of Athens for 3 years. There, I served both as a Deacon and student. After I served as a Deacon for 11 months, I was ordained by the same Metropolitan as a priest in the church of Annunciation at Koropi, Attikis. At Koropi and Markopoulo Attikis, for three years, I worked with some of the finest priests there. On June 25th 1981, I graduated from the above school of theology. On December 14th 1981, I returned to Charlotte NC to serve as a priest along side with the late Fr. Phithon Constantinides (known as Fr. C), with the blessings of the late Archbishop Iakovos.

On August 1989, my two sisters and my brother in law were killed as a result of an automobile accident. They left orphan two daughters. After few months from the accident, my mother passed away.

I served as a priest at the church of Holy Trinity Greek Orthodox Cathedral, Charlotte NC until my retirement in May 2005. Me and my presbytera we devoted our bodies, hearts and souls to the church and to the Orthodox faith and tradition. We gave our best to the community. I, as a priest remained faithful to my duties. However, in order to maintain that great responsibility that I received from the hands of the bishop at the day of my ordination in spite of my unworthiness, I had to deal with many difficulties from some of Orthodox parishioners. Some of them, because of their financial position and their influence in the community and the city and because they were influenced by protestant ideas, they wanted to impose those ideas in the Orthodox Church teachings and tradition. They thought that the Church and the Orthodox tradition are the same as the teachings of their village kafenion. However, as a priest, I had to defend the teachings of our Church. Because of that, I got into a conflict with them and I went through some difficult times. However, I forgive all of them from the bottom of my heart, I love all of them. From me and my presvytera, we wish to all of them, God's blessings. May God grant them guidance, may he shine His light upon them so they can continue and maintain the teachings and tradition of the Holy Orthodox Church in this blessed continent called America where we live and raise our families.