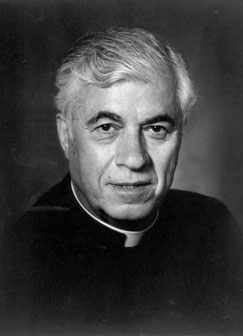 Reverend John C. Zanetos had a distinguished career as clergyman in the Greek Orthodox Church in America for forty-eight years.

Father Zanetos was born on March 16, 1920, the son of Costantinos Zanetos and Evghenia Spanos in the town of Karavas, on the island of Cyprus.  Upon his graduation from the Pancyprian Gymnasium, he immigrated to the United States in 1937 and became a naturalized citizen.  First Graduate of The Greek Orthodox Seminary in America.

In 1938 he entered the newly formed Greek Orthodox Seminary at Pomfret, Connecticut and as a member of the first graduating class, earning his diploma in 1942.  He also attended the Hartford Seminary where he received his B.D. degree in 1945.

In 1945 he married Irene Greos of New Britain Connecticut, and in the same year was ordained to the priesthood.

Liturgical Assignments throughout the United States

Father Zanetos' first assignment was in 1945 to the Assumption Church in Poughkeepsie, New York.

In 1949, he was appointed to the Church of Saint Spyridon in Washington Heights, New York City.

In 1950, he was appointed to the Church of Saints Constantine and Helen in Brooklyn, New York.

In 1956, he attained the position of Dean of the Greek Orthodox Cathedral of New England, in Boston, at the Church of the Annunciation where he served for twenty-six years until 1982.

In California, he was assigned the Church of Saint Anthony in Pasadena, where he ministered until he retired to Boca Raton, Florida in 1986.

In the course of his career, Father Zanetos taught for four years at the Teachers College at Saint Basil's Academy in Garrison, New York.

He served on the Board of Education of the Archdiocese of the Orthodox Church of North and South America.

He served terms as chaplain at both Vassar College and Columbia University.

In 1952 he sponsored federal legislation through Congressman Dorn of Brooklyn allowing Orthodoxy to be recognized as a religion on the dog tags of servicemen.

While in New York, he founded and was the first national president of the Pan Cyprian Society of America to aid Cyprus during its revolution for independence.

He represented the Orthodox Church on numerous television shows in New York with hosts such as Hugh Downs, Arlene Francis and others.

During his tenure in Boston in 1965, he was ordained "Protopresbyter"  (Archpriest) the highest rank for a married priest in the Orthodox Church.

From 1959 through 1975 he hosted and produced a half hour weekly radio program, broadcast in Boston.

From 1965 through 1972 he was a member and officer of the Massachusetts Committee of Catholics, Protestants and Jews.

He served on the Archdiocesan Council.

He was a member of the Board of Trustees of The Hellenic College and Holy Cross School of Theology.

He was a member of the Spiritual Tribunal and the Diocesan Council of the Diocese of Boston.

He served as a member of The Committee of Ethics For The State of Massachusetts under Governor Volpe, Governor Furcalo and Governor Peabody.

He served as the director and as trustee of the American Friends of the Blind in Greece for twenty five years.

He was a member of various inter-Church and inter-faith committees and organizations throughout the United States.

He represented the Orthodox Church in the American Council of Churches.

While retired, he organized and founded the Retired Greek Orthodox Clergy of America and served as its first president for four years.

He was, until the time of his death, a member of the Spiritual Tribunal of the Diocese of Atlanta.

Churches he served during his years of retirement include:

Father Zanetos is survived by:

His wife, Irene.
His son Dean Zanetos, residing in Los Angeles, California.
His daughter Eugenia Buba, living in Andover, Massachusetts.
He is also survived by grandchildren:

"Live each day as if it were your last on this earth, yet pursue every day as if you expect to live forever."