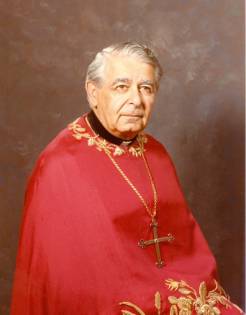 Father George Paris Gallos was born in Minneapolis, Minnesota on February 24, 1915 of Greek immigrant parents. He obtained his Bachelor of Arts Degree from Macalester College in St. Paul Minnesota, a diploma from the Greek Orthodox Seminary, a B.D. from Hartford Theological School and an S.T.M. from Andover-Newton Theological School. In 1936 as an undergraduate at Macalester College, he became the first student in the foreign exchange program to the Orient at Yenching University, Peiping, China.  Fifty years later he received an Honorary Doctor of Divinity degree from Macalester College.

Awarded an exchange pastorate by the National Council of Churches and The British Council of Churches, Father George spent the summer of 1962 in England.  He was awarded the Alumni Citation from Holy Cross Seminary and received the distinguished Saint Cecelia Medal from Boys Town, Nebraska.  Father Gallos received the Saint Romanos Medal from the National Forum of Greek Orthodox Church Musicians. He served many years as President of the Alumni Association of Holy Cross and Treasurer of the Retired Clergy Association.

In 1942 he married Anna Gerotheou, the daughter of a priest and a church musician from Somerville, Massachusetts. During their 53 years of marriage they worked side by side as Priest and Choir Director, and also conducted choir schools, choir federations, workshops and were instrumental in the formation of the National Forum of Greek Orthodox Musicians.  Father Gallos collaborated with Anna by transliterating Greek into English for several of her liturgical compositions. They had two sons, Stephen and John.

After retiring from the Annapolis parish in 1986, he was invited to serve as Chaplain of the American Farm School in Thessaloniki, Greece where Anna served with him as choir director of the school. During their tenure in Thessaloniki, Father Gallos studied at the University of  Thessaloniki School of Theology, Department of Liturgics, and Anna furthered her studies in Byzantine Chant.

A natural musician with a compelling tenor voice, Father Gallos also excelled in language, arts, and communication.  A charismatic speaker, he captured the attention of a wide variety of audiences in addition to his congregations.  He was perennially invited to speak at numerous civic occasions, hosted a weekly religious television show for a period of time, and once gave the invocation to the Congress of the United States.  He was awarded the Key to the City when his pastorate duties concluded in Baltimore.

In addition to his regular, full-time parish duties, Father Gallos was responsible for starting the parishes of Salisbury, Frederick, and Greenbelt, Maryland, frequently travelling outside his own metropolitan area to perform Saturday Liturgies and other services. During his tenure in Annapolis, Maryland, Father Gallos performed very early Sunday morning prayer services for Orthodox Midshipmen at the United States Naval Academy prior to celebrating the Liturgy at his parish, Saint Constantine and Helen.

Father Gallos was an architect for Orthodoxy.  In all his parishes he was a catalyst for planning and building new churches and/or business and youth centers to accommodate the expanding congregations that were the hallmark of his ministry.  Father Gallos died in 1995 while serving as Pastor in St. Augustine, Florida.