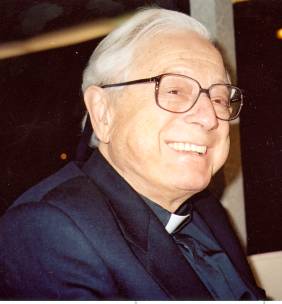 Rev. Vlahos entered the Holy Cross Seminary, in Pomfret, Connecticut, 1942, and graduated in 1948. He was ordained into the priesthood at the Annunciation Cathedral in Boston by Archbishop Athenagoras Cavadas in 1948.

His long pastorate in Oakland, and his leadership and spiritual guidance was instrumental in building the Church of the Ascension, now a Cathedral.

Preceded in death by his parents Kathryn and Arthur Vlahos, sis­ter Cassie and brother Orestis, he is survived by his wife Betty of 56 years, son Athan and wife Maria, granddaughters Kali and Joanna of Carlsbad, daughter Kathryn Simon and husband Rory of Escondido, and niece Denise Block and husband Phil of N. Hollywood.

Rev. Vlahos, an ordained Greek Orthodox priest and a licensed Psychotherapist, was recognized for his many personal attributes and distinguished achievements in the fields of Spiritual Growth and Human Behavior. He completed his clinical training in psy­chology at St. Mary's Hospital, McAuley Neuropsychiatric Institute, San Francisco, and later became Chair of Human Behavior at USIU and National University of San Diego.

Appointed first director of the Logotherapy Institute in San Diego by Dr. Viktor Frankl. At the Invitation of Dr. Frankl, was trained at the Polyklinic Hospital in Vienna, Austria, where he became Assistant to Dr. Frankl and appointed professor at the Polyklinic. The American Medical Society of Vienna honored Rev. Vlahos Life Membership for excellence as professor and therapist.