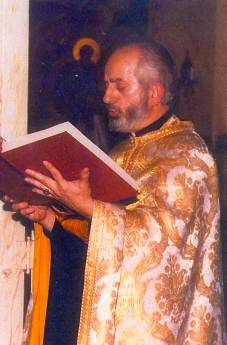 Father John Kostopolos was born April 26, 1925 in Pittsburgh, P A, the second son of William (Basili) and Angeline (Angeliki) Kostopolos. His elder brother is Peter Kostopolos, also of Pittsburgh. He died December 26, 1981, in Lakewood, OH.

Father John graduated from Allegheny High School in 1943 and enlisted in the US Army Air Corps after graduation. He was sent to Officer's Training School at Minnesota State Teacher's College in November, 1943, and graduated as a Flight Lieutenant in February, 1944. Thereafter, he was stationed in California and Guam, flying on 33 missions over the Empire of Japan. He received the Good Conduct Medal and was honorably discharged in 1946. He graduated from the University of Pittsburgh in 1950, attending on the G.I. Bill, with a BS in Biology.

After a brief stint as a social worker, Father John joined United Engineering & Foundry Co. (later Wean United), a manufacturer of steel rolling mills and equipment, where he remained for 31 years in a variety of positions--most lately creating proposals for large millworks worldwide.

He was Superintendent of Holy Trinity Greek Orthodox Church Sunday School in Pittsburgh for 15 years. Bishop Gerasimos of Abydos, then-Bishop of the Pittsburgh Diocese, was led after prayerful consideration to propose to Father John that he participate in the Orthodox Church in America's Late Vocations Program with the express purpose of being ordained in order to serve the tiny, devout parish in Morgantown, West Virginia. This allowed him to retain his full-time work in Pittsburgh while serving his Lord and the loving people of Morgantown by commuting on weekends and on his annual vacation from his employer. This he did joyfully, but with increasing fatigue, for six years from 1975-1981, succumbing to a massive heart attack on the day after Christmas while visiting his presvytera's family in Ohio. Mourned in death as much as he was loved in life, his funeral service was chanted by 14 priests, two bishops, and several monks. He was then laid to rest at the Greek Orthodox Cemetery in Allison Park, Pennsylvania on December 30, 1981. May His Memory Be Eternal.