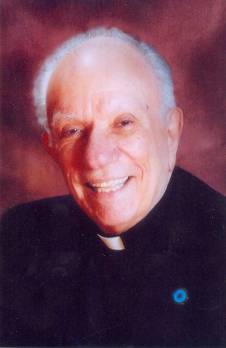 Father Nicholas L. Vieron, son of Leonides and Ellas (nee Metaxas) Vieron, was born in New Orleans November 13, 1925. He graduated from high school at the age of 16 and immediately went to Pomfret, probably the youngest ever to enroll at our seminary. A 1947 Holy Cross graduate, he was ordained to the priesthood October 26, 1948, by Bishop Germanos Polizoides, and served one year in Louisville, KY, and five in Huntington, W. Va., before being assigned in 1955 to the Annunciation Church in Memphis. He retired in 1991 as Pastor Emeritus of the Memphis church.

Although Fr Vieron is a graduate of the Scoli in Brookline, he considers himself a  "Pomfret Man," having spent four of his five years at the original school in Connecticut where Bishop Cavadas was the first Dean. Because at the time of his graduation our seminary was not accredited, he had to first earn an undergraduate degree which he did from Marshall College in Huntington, a B.A, before pursuing graduate work. He earned a Masters Degree in History from Marshall University in 1955, and later, in 1970, a Jurisprudence Degree from Memphis University School of Law.

A senior citizen Memphian, Loretta C. Taras, wrote the following in a 2005 parish commemorative album: "Father Vieron's ecumenical spirit is his hallmark. He made the Orthodox Church known to the entire Mid-South. His prayer, 'Whether we worship in the Shadow of His Cross, or near the Star of David, or by some other symbol or by no symbol at all, we all stand as brothers and sisters under the Fatherhood of our One God, a truth indelibly written in our hearts in black and white,' has comforted and uplifted people all over the city. One cannot forget his role in the struggle for human rights during the turbulent late 60s when he and a small group of white ministers, together with Dr. Martin Luther King, Jr., tried to heal a suffering Memphis community. Many will remember Father Vieron for his inspiring first-person homilies when he has been the disciple John, Peter, the Panagia and Pontius Pilate." Mrs. Taras concludes her article with these remarks: "During the last half century the Annunciation Church of Memphis has indeed been blessed to have two wonderful priests, Father Vieron and now Father Paul Christy, and to witness their love and respect for one another. We pray that they will continue to serve and please both God and man."

Even in retirement, Fr. Vieron remains active in the ecumenical circles of the city and in the Memphis Ministers' Association where he is embraced as its "elder statesman!" He also serves as Chaplain of the Memphis Touchdown Club. One of his greatest joys, however, comes from sharing an 82-year-old experience with the students of his Adult Greek Class, in its 36th consecutive year. Students from all walks of life enroll in his course, which is not a fund-raising project, but it is a "fun" program where all graduate "with honors!" The 15-week course exposes the students, the majority of which are not of Greek ethnic background, not only to the New Testament Language, but also to ancient and modern Greek history and art. It also introduces the students to the Orthodox Faith and to Greek traditions, including culture, food and dance. He "fills-in" at mission churches where there is no full-time pastor or for vacationing priests. He is also honored to respond to invitations to address group and continues to enjoy playing racquetball three times a week.

However, it is editing The RCA "Epistle" which brings him the greatest joy. The monthly publication reaches over 210 retired priests, 119 widowed presvyteres, His Eminence, Archbishop Demetrios, all the Metropolitans, the Associate Members and all the sponsors, a circulation of about 550. The Epistle sort of speaks for itself: "It brings us together as a family" - "It's the link that binds us" - "Presvytera and I fight over it" - "We widowed presvyteres were forgotten until the Epistle came along" - "It's like a 'love letter" - "it's the most enjoyable publication I receive." The cost of the monthly newsletter is subsidized by sponsors who donate $150 in memory of or in honor of loved ones. It takes two sponsors for each issue. Fr Vieron has served as editor since 1992 and has not missed a deadline in over seventeen years! He says this gratefully.

Fr Vieron also takes humble pride in having designed the emblem of our Retired Clergy Association, which is a symbolic one. It reminds us that, although we are happily and gratefully retired clergy of the Greek Orthodox Church, yet each and every one of us remains «ΙΕΡΕΥΣ ΕΙΣ ΤΟΝ ΑΙΩΝΑ» - "A PRIEST FOR EVER" as stated in Hebrews 5:6. The bright Byzantine colors of our emblem also have symbolic meaning. The outside circle represents our Golden Years, the blue, our Heavenly Kingdom, while the red stands for both, Our Lord's shed Blood and the Joy of His Glorious Resurrection. The inner XP abbreviates the name of our beloved Anointed One - Χριστ?ς. As for the fish, we who have spent a lifetime serving as "fishers of men," also know the acrostic meaning of the word ΙΧΘΥΣ. A lapel pin is worn with humble pride by all our retirees.

Father Vieron's wife, Bess, a native of Brooklyn, is a 1948 graduate of Saint Basil's Greek Teachers' College. They have two sons, Leonidas who practices internal medicine in Memphis and Paul, a graduate of our Holy Cross Seminary. They are also blessed with four grandchildren, Nicholas, Matthew, Stephanie and LeeAnn. Memphis.

Fr. Vieron was on a weekly half-hour Sunday morning CBS television show called, 'What Is Your Faith.' Several clergypersons participated in it, commenting on questions submitted by the viewers. Fr Vieron was a regular for 23 consecutive years, often serving as moderator."

Retired Clergy Association of America from July, 1992 until the present - 2007.