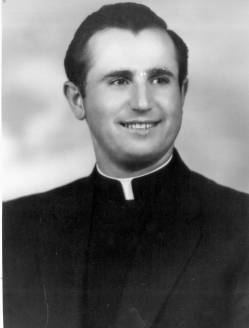 Paul was born May 29, 1927 in the village of Parori, Sparta. He was one of seven children born to the Rev. George Apostolakos and Helen Kanelakos. At 12 years old he became the psalti in the village church.

He finished high school in Sparta and after World War II, he and his family emigrated to America. Upon his arrival, he entered the Seminary at Pomfret, Connecticut and in 1951 graduated from the Seminary in Brookline, Massachusetts.

Before his ordination, he met and married Vasilia Sakoutis, of Icarian descent but born and raised in New York City. In December 1952 Paul was ordained to the priesthood. He served the following parishes: Saint Anagyroi. in Rochester, Minnesota, The Assumption church in St. Louis, Missouri, Saint Demetrios in Jersey City, New Jersey, the community of Jacksonville, Florida, Saint Nicholas in Babylon, NY, Saint Constantine and Helen in Jackson Heights, NY, Saint Barbara, New York City and the community of Kingsbridge, NY.

In Paul's last few years, his health began to decline and he fell asleep in the Lord on March 8th, 2006.