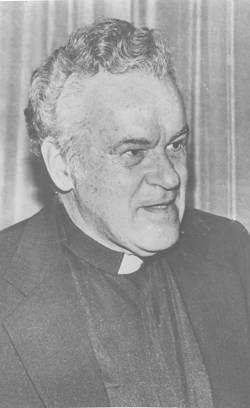 The first of six children, Father John, as he liked to be known, was born in Lancaster, PA on March 5, 1919. In 1937 he entered the first Greek Orthodox Seminary in Pomfret, Connecticut and was a member of the first graduating class in 1942. Soon after his graduation, Father married Stavroula (Lula) Trivelas on June 7th  and was ordained a Deacon in July, 1942. Father and Presvytera moved to Chicago to serve the Saint Demetrios Church for almost a year. In 1943, Father and Presvytera were transferred to Savannah, Georgia. It was here he was ordained a priest and served this community for the next ten years. This was also where Father's and Presvytera Lu's three children were born. In 1951, he opened the doors to the Hellenic Community Center which housed the Sunday School classrooms, a gymnasium/auditorium and the Greek School classes for the church.

In 1953, his calling took him back to Chicago, this time to help the growing community of Saint Andrew's Church. He worked side by side with the community members to build a new Church overlooking Lake Michigan. Along with the main church building, a chapel, classrooms, and Hellenic Center were also built.

During his twenty years in Chicago, Father made several noteworthy trips. In 1963, he was selected as the Greek Orthodox Representative for the World Council of Churches to travel to Russia. Three years later, in 1966, Father visited Mt. Athos and Saint Catherine's Monastery. This was a trip that meant a great deal to him both historically and religiously.

During his tenure in Chicago, Father was bestowed the title of Protopresvytero. With their children grown, either off on their own or in college, Father and Presvytera transferred to Jacksonville, Florida in 1972 and stayed until 1978 when his services were again called upon in Clearwater, Florida. This would be his last assignment. Father John retired in 1985 and enjoyed his grandchildren and some traveling time. His retirement would be short. Father John passed away September 6, 1988. He is sorely missed by his family and all whose lives he had touched.