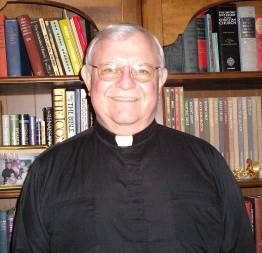 Fr. Joel McEachen was born in Physicians' Hospital, Jackson Heights, Queens, NY, on June 22, 1939, to H. Stuart McEachen, an immigrant from Canada, and Dorothy Florence Lombard, a Mayflower descendant. He was baptized in Corpus Christi Church, Woodside, Queens, NY. The family moved to West Englewood, NJ, and then to Leonia where Joel entered Leonia Elementary School. He graduated from Leonia High School in June, 1955, matriculated at Rutgers University where he was a member and treasurer of Alpha Sigma Phi social fraternity, graduating with a B.A. in June, 1959. A member of a U.S. Naval Reserve blimp squadron at NAS Lakehurst, NJ, he entered active duty and flight school, Pensacola, FL, served

in Heavy Attack Squadron FIVE on board USS Forrestal in which he made two Caribbean and two Mediterranean cruises, with many visits to Greece, Rhodes, and Cyprus. Upon release he returned home and worked as an IBM senior programmer. Having attended Eastern rite churches with relatives, and many Orthodox churches in New York and Greece, he began attending Christ the Saviour and Saint Anthony's Orthodox churches, founded in north Jersey near his home using all English language services. He was received into Orthodoxy by Chrismation at Saint Anthony's Church, Bergenfield, NJ, entering St. Vladimir's Seminary in September, 1965. Having been a Boy Scout, Scoutmaster, and Explorer Post Advisor as well as leading a Philmont Scout Ranch, NM, trek in July 1965, he was sent to the annual NY area Scout retreat on Long Island that same month by Saint Vladimir's Dean, Fr. Alexander Schmemann. Several weeks later, he was appointed youth director at Saint Demetrios' Church, Astoria, NY, where he served until June, 1967. From September, 1967, to June, 1969, he was youth director at Saint Nicholas Church, Flushing, NY, and Sunday School teen seminar leader at Holy Trinity Church, East Meadow, LI, NY. He served as a driver/attendant on the Leonia Volunteer Ambulance Corps from 1963 to 1967.

During his senior year and the year after, he served St. Vladimir's Seminary as business manager with responsibilities for the refectory, bookstore, maintenance of buildings and grounds, and vehicles. He received an Masters of Divinity from Saint Vladimir's in the class of 1968. In June, 1969, he left for the University of Thessalonica with his wife and infant daughter Elizabeth for a year's studies and a third visit to the Holy Land. Upon their return home with Greek-born son John, Joel was ordained deacon by Bishop Timothy of Rodostolon at St. Andrew's Church, Chicago, IL, and priest by Archbishop Iakovos at Saint Nicholas Church, Flushing, NY, September 27, 1970, where he served as assistant pastor until October, 1973. After moving to Connecticut, Fr. Joel was appointed pastor of Holy Trinity Church, Ansonia, CT, serving there to this day. During those years, he worked as an IBM systems programmer on DOS/VS, VSE/ESA, VM, and MVS systems until 2005.

With extensive Scout experience, Fr. Joel revised the Alpha-Omega Scouting award program in 1975, wrote the CHI-RHO program in 1978, and developed the Prophet Elias adult leader recognition program and emblem in 1988. He also helped with the early program at the Ionian Village and was a counselor there in 1972. He served as Orthodox chaplain at five quadrennial Boy Scout National Jamborees beginning in 1981. The Boy Scouts of America recognized this service as well as service at the annual Greater New York Orthodox Scout retreats with the Silver Beaver award. The Girl Scouts honored Fr. Joel with their Impact Award. The Eastern Orthodox Committee on Scouting honored him with the Prophet Elias emblem in 1996. He served the Archdiocesan National Youth Council 1971-1973, and completed certification training as general hospital chaplain with the National Association of Catholic Chaplains in 1972, under Fr. Benedict Groeschel, C.F.R.

Fr. Joel earned the M.B.A. degree from Sacred Heart University, Fairfield, CT, and completed all doctoral course work in Management Systems at the University of New Haven, CT, where he was elected to Sigma Beta Delta Business Honor Society. He was an adjunct instructor in computer science at Sacred Heart University and Housatonic Community College between 1981 and 2004. He is a member of the Sons of the American Revolution.

Fr. Joel is now serving as a Board Member of the Retired Clergy Association.