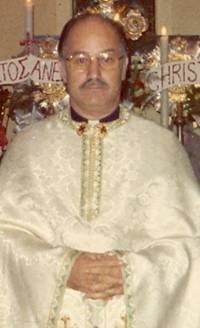 On May 12, 1946 Jim and Ellie were married at Saint Demetrios Church in Jersey City. In 2006 they celebrated their 60th wedding anniversary. They have two children, Georgia and Nicholas (deceased) and two grandchildren, Julia and James. He attended Asbury Business School in 1953, and continued his education at Monmouth University in 1956.

Father Jim was initiated into the Asbury Park A.H.E.P .A. Chapter in 1953. At that time, this Chapter had only five (5) members. Father Jim became instrumental in helping this Chapter grow into one of the largest districts in the region. He served as the A.H.E.P.A. Chapter President from 1966-1971. During this time Father Jim had the distinction of initialing a record 26 new members into A.H.E.P.A. in one ceremony. Three of these new Ahepans later advanced within the organization and served as District Governors. Father Jim has spent over 50 years as an active brother in the A.H.E.P.A and during that time his efforts have help perpetuate the ideals of Hellenic Culture. In recognition of his outstanding performance and achievements throughout his A.H.E.P.A years, he was honored in 2002 as “Ahepan of the Year".

Upon completion of his religious studies under the direction of his mentor the Very Reverend Spyridon Coutros from Saint George parish, Asbury Park, New Jersey. Father Jim was ordained a priest in 1972 and was assigned to the Saint George parish in Asbury Park. During his tenure as assistant Pastor to the Asbury Park congregation, he served as the State of New Jersey Youth Director for 7 years. Under his leadership, the Asbury Park GOYA recruited a record of 126 members.

In 1972, Father Jim and his wife, Ellie, founded the Hellenic Dancers of New Jersey. Since the inception of the Hellenic Dancers hundreds of young Greek-American of second and third generations has dedicated themselves to the perpetuation and sharing of their rich cultural and heritage with American audiences. Ellie has researched and amassed a repertoire of over 300 dances, songs and traditions from virtually every corner of the "Greek World". Today this outstanding troupe has been the recipient of standing ovations by prestigious and appreciative audiences exceeding at times 34,000 persons. Their performances have been by special invitation only, and including civic, cultural, philanthropic, academic and social affairs. In 2007 The Hellenic Dancers will be celebrating 35 years of dance.

His next assignment was to Saint Barbara's Greek Orthodox Church in Toms River in 1982. In 1992, he was assigned as assistant pastor at Kimisis Tis Theotokou in Holmdel. Father Jim served this community with devotion, leadership and love. Father Jim was a very special priest in the community. Everyone in the community would always have a different name in his eyes. He would walk by and say hello "Janet", "Stella" and the parishioners would respond back even though that wasn't their real name. You could not but love Father Jim. He was the "best", there was nothing he wouldn't do for you. He would try and get it done no matter what it took. He was truly a "Father" to all in the Kimisis community. On August 15, 2006 Father Jim was elevated to the level of Very Reverend James N. Chakalos. Father Jim was overwhelmed with his elevation and was so very proud of it.

On September 4, 2006 our beloved Father Jim fell asleep. Father Jim would have celebrated his 35 years of priesthood in 2007.