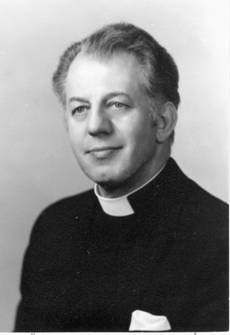 Father James C. Christon was born in Harrisburg Pa. on May 15, 1919. The son of Constantine and Angeleki Papachristou, he was educated in public schools in Harrisburg, PA, Altoona PA, and Hagerstown, MD.

He graduated from Holy Cross Theological School in Promfret, Conn. in 1944 and was ordained into the Priesthood in October, 1944. Father Christon received a STM degree from Berkeley Divinity School (Yale University) in 1951 and an MA from Jersey City State College in 1972.

He married Angelyn (Panagopoulos) Christon in 1944 and had one son, Dean Christon, and one grandson James Christon.

Father Christon was active in a number of non-profit and civic agencies serving as a director or officer of many such organizations including Rotary International, the Red Cross, the Girls Club, the Visiting Nurse Association, and various clergy associations.

He was awarded the Office of Confessor in 1952, the Office of Economos in 1957 and was made Protopresbyter of the Archdiocesan See and Ecumenical Throne in 1969.

Father Christon also received a number of civic recognitions including the Paul Harris Fellow Award from Rotary International and was awarded the Key to the City of Manchester, N.H. twice.