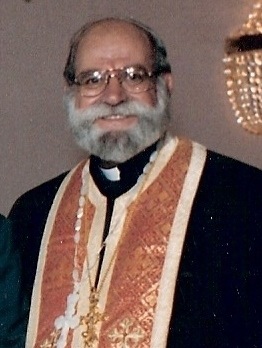 Rev. Dr. George P. Kalangis, minister of the Holy Altar for 50 years at the Greek Orthodox Archdiocese of America. He was born in the village of Georgitsi, Sparta in 1935. As a young boy, he was initiated in the art of church chanting along side with father, Panagiotis Kalantzis. Who at the time was the leading chanter of the Holy Church of Saint Athanasios of his home village, and his uncle, Rev. Demetrios Gouzoulis, the parish priest and also a Teacher at the village's Elementary School.

At the devout urging of his mother, Fr. George studied chanting for seven years with, Panagiotopoulos (Kouros), professor and leading chanter of the Ecclesiastical Seminary of Corinth, Greece. When he finally came to the Untied States he then studied with Christos Vrionidis, music teacher and choir director of the Holy Cross Theological School in Brookline, Mass. He acquainted himself with distinguished music teachers and leading chanters such as Spyor Peristeris, Athanasios Karamanis, Harilaos Taliadoros, and Theodore Vasilikos. He cultivated his mind to high extent and received many diplomas and degrees.

Father George has served as first President of the "Romanos 0 Melodos" Chanters Association for four consecutive years. This choir was established by said Association under Professor Demetrios Fousteris.

On July 3, 1996 he chanted for the Clergy-Laity Congress of the Greek Orthodox Archdiocese of North and South America, along with his wife Presvytera Eleni, student of Piano and phonetic music. They worked together under the direction of Professor and leading Chanter, Mr. Sp. Peristeris, of the Holy Metropolitan Cathedral of Athens, which whom was invited to the U.S. by Demtrios Fousteris. Since then he has published an audiotape with hymns from the small Paraklesis Canon, while a new titled "Preparation of the Throne of Lent" is underway. Father George is endowed with an important spiritual and musical personality, followed by exceptional sensitivities and admirable gifts.

Father George served as head priest at the Greek Orthodox Archdiocese of America in several states, where he does excellent organizational and spiritual work. The late Ecumenical Patriarch Demetrios A, in Constantinople, awarded him the "Offikio" of "Protopresbyter of the Ecumenical Throne" for his spiritual and musical contribution to the church.