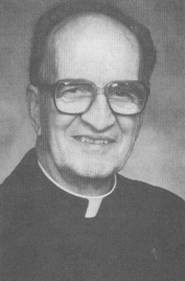 Father George and Presvytera Athena (Kostas) Kalpaxis, both of blessed memory.  Fr. George, of Bethlehem, PA and Pres. Kalpaxis, of Haverhill, MA, had met on the campus of Holy Cross Theological Seminary, then in Pomfret, CT.

Fr. George served over a decade in Wilmington, DE with the construction of the Holy Trinity Church.  He served in Houston at the Annunciation community, and in Cherry Hill, NJ with the new church of St. Thomas.  He served the longest at St. Nicholas church in Baltimore, MD.  James, the second child of Father and Mrs. Kalpaxis, was born in Wilmington, DE.

"In spite of our parents' community responsibilities, it was always clear that family was first," Jim states.  "My brother, sister and I attended excellent public schools and ultimately completed post-graduate professional degrees.  Steven is an economist, I am an ophthalmologist, and Anita is an educator/psychologist.  Our foundation and forbearers have been a lifelong blessing and I welcome opportunities to extend blessings to others."

When Father George served in the metropolitan Houston community, there were opportunities for "ecumenism orthodox-style."  "He served on the interfaith council, was part of the envoy to the state capitol when orthodoxy was pronounced a major Texas religion, and helped publicize Billy Graham's local crusade.  My parents taught us tolerance of other faiths and did not discourage me from participating in Methodist children’s' choir, Baptist roller-skating nights, and Lutheran or Episcopal youth activities.  On a recent drive through town, I could recall many events at church venues.  By this exposure to a broad spectrum of people and views, I have been better able as a physician to serve patients from all walks of life."

Jim remembers how his father loved to tell jokes.  One of his most enjoyed jokes:  Noticing the price tag on a suit he was trying on, the pastor told the haberdashery salesman, "I can't afford this.  I'm just a poor preacher."  "Yes, I know," said the salesman, "I've heard your sermons."

This Biography was submitted by his son James George Kalpaxis

Hundreds of Greek Or­thodox faithful from parishes across the country where the late Fr. George Kalpaxis had served as a priest, gathered at Saint Nicholas church in Baltimore, Maryland to pay their last respects and attend the funeral service to their spiritual father whom they respected and loved.

Metropolitan Evangelos of New Jersey officiated at the funeral ser­vice assisted by many area clergy, since the departed priest was one of the most prominent American-born clergy who enjoyed respect and reverence. He was 89 years old and died in Austin, Texas after a short illness.

The late Fr. George was born in Enfield, Connecticut in 1918. He was the son of the late Efstratios and Olga (Anagnostou) Kalpaxis, early immigrants from Lesvos, Greece. Soon thereafter, the family moved to Bethlehem, Pennsylva­nia, where Father George's father ran a small bakery and where his younger brother, Harry and his sis­ter, Beatrice, were born. He attend­ed Liberty High School where he participated in the basketball and track teams and sang in the glee club.

As a young boy, he accompanied his widowed mother to the Saint Nicholas Church in Bethlehem, where she served as its caretaker. At a very early age, he developed his love for the Church by becom­ing an altar boy and assisting the priests throughout his youth. It was natural then, that by the time he graduated from high school in 1936, he received the divine calling to become a priest. This decision coincided with the desire of Arch­bishop Athenagoras, then head of the Greek Orthodox Church of the United States, who later became Ecumenical Patriarch in Constan­tinople, to establish a Theological School to train American born young men into the priesthood. However, because of the Great De­pression, the establishment of a theological school did not occur until 1937. In the meantime, Father George had a series of jobs, includ­ing working as a laborer in a silk factory and participating as a mem­ber of the Civilian Conservation Corps.

In the fall of 1937, Father George entered Holy Cross Theo­logical School, then located in Pomfret, Connecticut, as a member of its first class. He graduated in. June 1942 and married Athena Kostas of Haverhill, Massachusetts at Saint Apostle's Church later that month. He was ordained to the dia­conate at Saint Spyridon Church in Washington Heights, in New York City on August 2, and to the priest­hood two weeks later at Saint Barbara Church in New Haven, Connecti­cut.

Soon thereafter, he was as­signed to their first community, Saint George Church, in Keene, New Hampshire, where Father George served until 1943. While there, he taught Greek School, established the church's first Sunday School and youth programs and moderat­ed a popular radio program.

From 1943-1954, he served at the Holy Trinity Church in Wilm­ington, Delaware. Under his direc­tion, he established a ministry for servicemen during the war and headed the Greek War Relief Asso­ciation in Delaware, which provid­ed food and clothing for war rav­aged Greece.

The Annunciation Church in Houston, Texas was his next stop in ministry in 1954.

In 1966, he was assigned to the newly created community of Cam­den County, New Jersey as its first permanent priest. He oversaw the organization of the community, and the naming (Saint Thomas) and the construction of the church in Cherry Hill.

Another new challenge con­fronted Father George in 1971, when he was appointed as priest of Saint Nicholas Church in Balti­more.

Father George officially retired from parish duties in 1991. This led to new and unanticipated chal­lenges. He led pilgrimages of the faithful to the Holy Land. He served many parishes in the Balti­more-Washington area whenever a priest had to be absent from his community. He conducted Holy Week and Easter services in small churches that had no priest -- most­ly in Texas and New Mexico. Bish­ops from around the world also called on him to serve their church­es wherever he was needed. In this way, Father George often traveled to such countries as Greece, New Zealand, China, Australia, Brazil and Argentina to minister to faith­ful Orthodox Christians living in those areas.