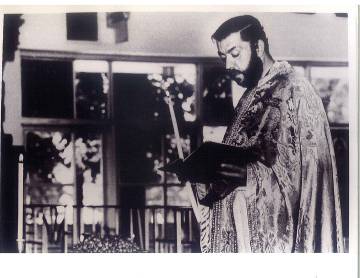 Fr. Andrew E. Georgaroudakis born on October 5, 1933 in Springfield, MA was the son of Eftechious and Mary (Koulierakis) Georgaroudakis. From an early age his life revolved around the church. He served as an altar boy and was active in his hometown parish of Saint George. Upon graduating from Classical High School in 1951 he entered Holy Cross Theological School -Brookline, MA and graduated in 1957 as class valedictorian. Following gradua-tion, Fr. Andrew continued his studies at the University of Athens in the Schools of Theology and Philosophy.

In 1960, he married the former Evangeline Vasilakis of Ambridge, PA and had two children Mariam and Christopher.

During his ministry he served the following communities:

Fr. Andrew was recognized and elevated to the rank of Economos in 1974.

Fr. Andrew was an avid reader, stamp collector, and had an appreciation for music and languages. Also, he was a member of the Editorial Team, which reviewed the red Divine Liturgy book used in many churches today.

In the parishes he served, he is remembered for the inspiring sermons delivered and bulletins he published treaching the word of God.  Fr. Andrew served his parishes as a humble servant of God. He tended to his flock defending Orthodoxy and preached the word of God with zeal and enthusiasm.